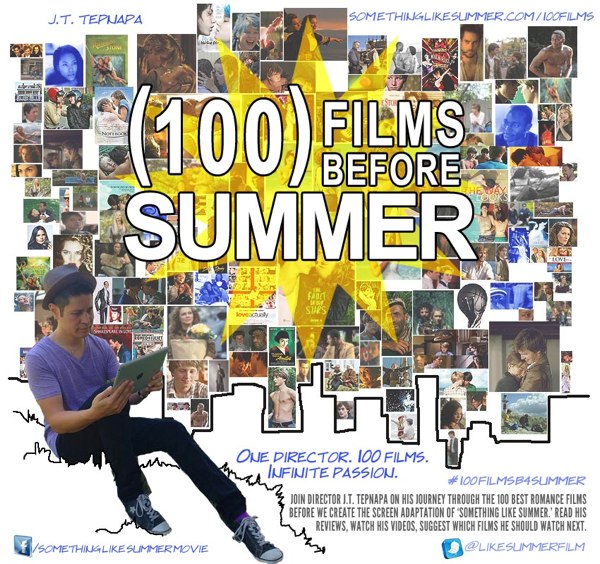 DIRECTOR J.T. Tepnapa is embarking on a journey of his 100 favorite romantic films to prepare for his part in bringing Something Like Summer to the screen, and he’s inviting fans along for the ride.

“There’s no better way for me to prepare as a director than to immerse myself in other films, the best romantic movies,” Tepnapa said.

Between now and when Something Like Summer goes into production, Tepnapa plans to review 100 films, starting out with the controversial lesbian love story, Blue is the Warmest Color, the straight teen romance (also based on a novel), The Fault in Our Stars, and classic Eighties adventure, Romancing the Stone.

Tepnapa plans to discuss what he learns from each film here on the website and on the Something Like Summer Facebook page, in blog posts, videos and other creative formats.

He hopes to have Something Like Summer fans join in the discussion and to suggest other films to review along the way.

“Let me know what aspects of the movies you recommend relate to the story of Ben, Tim and Jace,” Tepnapa asked fans. “I’ll let you know what I learned, and we can discuss it together.”

COUNTDOWN While we will be counting down the 100 films here on the website, they’re not in any particular order, so fans should feel free to write in with their suggestions of movies J.T. should watch.

“We’ve got to get started, because Summer will be here before you know it,” he added.

J.T.’s journey of 100 films will wind through Twitter (@LikeSummerFilm) with the hashtag #100FilmsB4Summer, on our Facebook page and on Instagram and Tumblr (stay tuned — links coming!)