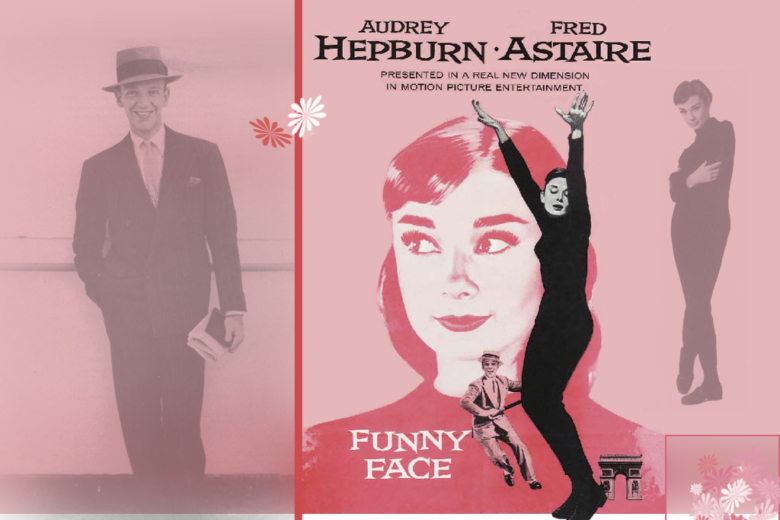 So, I figured I reach deep into the archives and watch a classic musical romance. I love Audrey Hepburn and Fred Astaire, so why not watch them together?

Funny Face is The Devil Wears Prada meets Ugly Betty in a fantastical musical romance.  Jo Stockton, Audrey Hepburn, is a shy and amateur philosopher who reluctantly gets swept up in a whirlwind trip to Paris when photographer Dick Avery (Fred Astaire) wants to turn Jo into a world-class runway model.

Funny Face is over-the-top fun. It doesn’t really take itself too seriously and it dazzles you with high glamour, top-notch production design, and of course, Fred Astaire. Even though he’s pushing 60 in this movie, he still has that magic when he dances.

I will say it’s a bit of a strange pairing given that there is a 30-year age gap between Hepburn and Astaire. Their romantic kisses are a bit awkward. The songs aren’t quite as memorable as they should be. However, the dance numbers from Astaire are simply magical. And there is a strange big dance number from Hepburn that starts off as post-modern bebop performance art and turns into a quite spectacular ballet and tap number.

MY FAVORITE scene is of Fred Astaire doing what he does best, giving his best song and dance under Hepburn’s balcony. What starts as a tap dance turns into a metaphorical running of the bulls. It sounds a bit wacky, and it is. But somehow Astaire’s grace and charm makes you root for more dancing.

What makes these scenes even more amazing is the limited angles and takes. Throughout much of Funny Face, there may only be one or two takes for the dance numbers. The camera weaves effortlessly in and out of the scene as they dance away. Even some of the quieter scenes may only shoot from one angle. Modern movie making rely on a variety of angles to cut a scene when sometimes the one take scenes can be so powerful on its own.

So if you don’t know by now, Something Like Summer is a musical romance, too. Along with Funny Face, I’ll be watching several musical romances as part of my 100 Films Before Summer. I want to see the many different ways filmmakers use music to bridge the real world of the film to the fantasy world in the character’s mind.

Funny Face excels at the fantastical elements, but leaves the plot a bit sparse. Another element that is similar to Something Like Summer is the trip to Gay Paree! Everyone should have Paris on their bucket list! Mine is Disney Paris!

Hepburn is sweet and Astaire still has his dancing moves in this Paris adventure, but their chemistry only comes alive while dancing.

Available on Netflix and Amazon DVD and Instant Video.