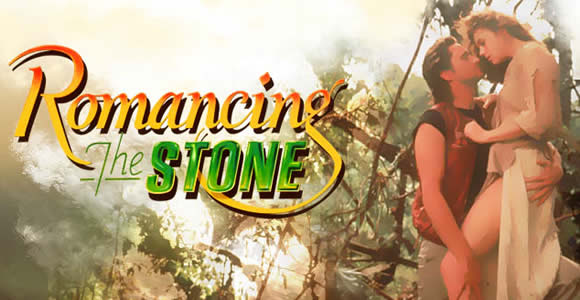 Romancing the Stone is one of my favorite movies. I’ve probably watched it a dozen times. It’s got action, adventure and comedy, and to earn a spot in 100 Films before Summer, it has romance!

If you haven’t seen this Eighties classic, please do! It’s about romance novelist Joan Wilder, who sets off to the South American jungles of Colombia after getting a distress call from her kidnapped sister. She soon finds herself in the middle of the kind of romantic adventure she writes about.

Romancing the Stone is definitely more action-adventure than it is a romance. But the romance sneaks up on you. The main characters, Joan Wilder and Jack T. Colton, start off adversarial. Joan has this romantic notion of what a “real” man should be. And Jack is … well, he’s a “real” man who is something of a reluctant hero.

MY FAVORITE scene is where Jack and Joan stumble into a drug cartel’s backyard looking for a car — with guns pointing at them from all directions. Then the drug lord discovers that Joan is romance novelist Joan Wilder. I love the idea that your novels can be read anywhere and by anyone around the world. And that a drug lord thousands of miles away can fall in love with romance novels.

This is a big, epic film. Although Something Like Summer will have its epic moments, it’s going to mostly be carried by the subtle performances of Ben and Tim.

One little nuance I loved in Romancing the Stone is that Joan Wilder loved baby bottles of booze, much like Jace in Something Like Summer. He loves everything compact — airline pillows, fortune cookies and tiny bottles of shampoo and booze. It’s the little things like that that make characters more fully realized.

I have to give this classic film four Sparkling Hearts for its big romantic adventure!