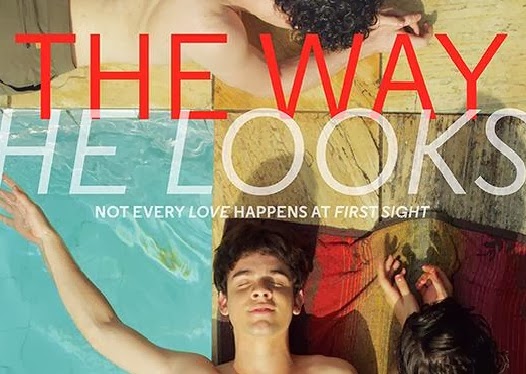 NOW HERE’S  a movie I had been anxiously wanting to see after watching the amazing short film (I Don’t Want to Go Back Alone) on which it is based. And I’m happy to list it as my first gay male romantic entry in 100 Films Before Summer.

The Way He Looks is a Brazilian movie starring Ghilherme Lobo as a blind high school student, Leonardo, struggling to find his independence at home, while at school he is mostly ignored and isolated from everyone except his best friend, Giovana (Tess Amorim). Their friendship is strained when a new student, Gabriel (Fabio Audi), joins the class. Gabriel’s dark curly locks and chiseled features attract many of the girls, including Giovana. But as the story unfolds, it seems Leonardo also has a crush on the new student. Does Gabriel like him, too? Will Leonardo have the courage to express his feelings for Gabriel? Is it worth risking his friendships?

More than a romantic movie, it’s about a young man growing up and finding his place in the world. Leonardo longs to be taken seriously and doesn’t see his blindness as a disability like everyone around him does. He dreams of escaping to some faraway place where he can recreate his personality. Instead, he finds his courage and personality blossom with Gabriel’s influence. He finds his own ways to enjoy movies, lunar eclipses, sunrises, and modern music along with his favorite composers, Bach and Beethoven.

MY FAVORITE scene? There are so many moments in The Way He Looks that tug my heartstrings. The sweet innocence of a first kiss is so endearing and honest that it makes remember my own first kiss with a boy. The fact that Leonardo has been blind since birth makes that tenderness even more sensual. It’s as if Leonardo can see more than any of his fellow students. The way Leonardo steals glances with a smirk or a touch makes my heart melt.

In one scene, Leonardo undresses and wraps himself in Gabriel’s hoodie. It’s the closest he can get to the real Gabriel.  In bed, he starts to touch himself while bathed in Gabriel’s scent. If I had to pick a scene, I would this one for its balance between its innocence and eroticism. Although there are at least a half dozen quiet moments that carefully find that same balance.

IT’S NOT so much that The Way He Looks is like Something Like Summer as much as it s that I want to capture the same kind of innocence that’s in this movie. When I read Jay Bell’s novel,  I was reminded of my own high school romances. I had quite a few sexual encounters, but there was one that was very special. I learned a lot things about myself through exploration. Those memories and feeling bubble up when I see movies like The Way He Looks.

And that is what I plan to show in Something Like Summer; it’s like capturing a special memory in time – freezing it – and putting it on screen so people can re-create their own experiences again and again. And for many people, it isn’t the first time they had sex that they remember fondly. It can be watching the sun rise together, a first dance, or maybe hanging on to a purple sweater that belongs to your best friend. Those are my fond memories, what were yours?

Ghilherme Lobo gives a mesmerizing performance as a blind teenager looking for his first kiss and independence. I hope to see a lot more movies from him. This one really makes my heart ache.

AVAILABILITY The Way He Looks is now available on DVD and streaming on Amazon and Netflix.