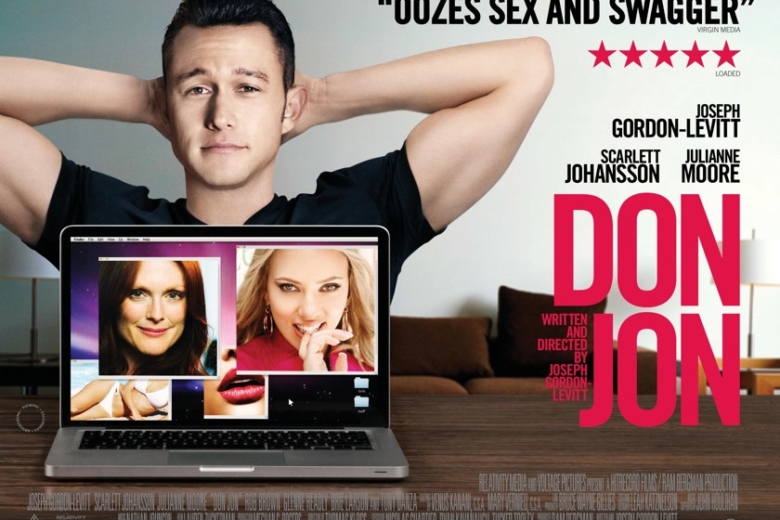 Here’s another romantic comedy-drama that I missed last year. All I knew about this movie is that it stars the very handsome Joseph Gordon-Levitt. I actually crossed paths with him years ago. I think he thought I was ogling him, but really I was shocked to see a celebrity in a North Hollywood diner.

Anyway, I was quite surprised to find out that JGL not only starred, but also wrote and directed Don Jon. He certainly created an interesting character for himself, his direction is solid and he assembled a great cast. I only wish the screenplay was as solid as his direction.

JGL plays Jon Martello, a modern day Don Juan, who gets all the ladies. And he has simple pleasures in life. All he cares about is –

Those of you old enough to have watched the 1980s TV sitcom, Who’s the Boss, will love seeing Tony Danza playing JGL’s dad. It was good to see him in a movie. And like Joseph, Tony Danza is totally ripped in his white tank top. Unfortunately, the family relationship is a bit one-note. Their scenes play out like MTV’s Jersey Shore.

The movie definitely takes an awkward turn with the introduction of Julianne Moore’s character, but they are right turns when it comes to honesty and passion. And although it’s not true love for Jon Martello, it might be as close as he can get.

Although Something Like Summer is a much more romantic movie, the two stories have some similarities. Like Don Jon, Ben has an opportunity to have two loves in his life: A high school romance with Tim and an adult romance with the more mature Jace. And like Julianne Moore’s character, Jace teaches Ben a lot about growing up and being a more honest man.

The movie is mostly serious, but the introductions of Scarlet Johansson and then Julianne Moore lighten up the tone. Also, I gives the sparkling hearts for JGL’s multiple shirtless scenes. He worked out for this movie and he really showed it off!