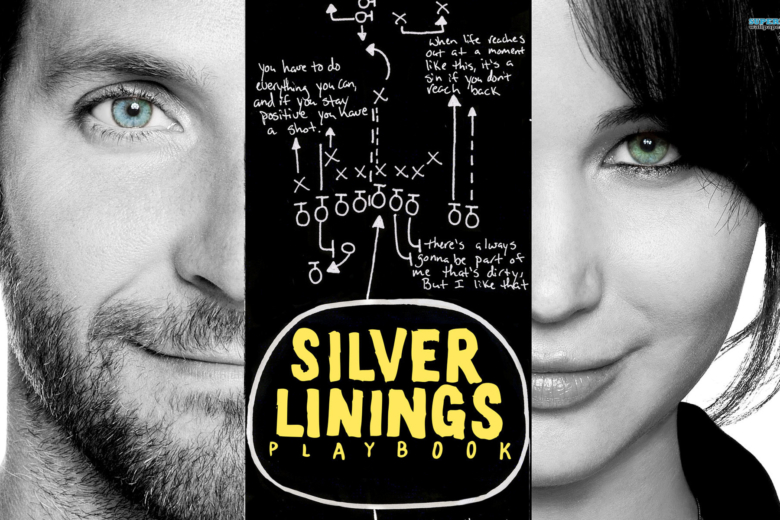 SURPRISE! Silver Linings Playbook is a surprise entry in my 100 Films Before Summer. I didn’t realize it was romantic comedy. I expected an explosive Oscar-worthy dramatic performance between Cooper and Lawrence. And what I got instead was a very funny and explosively romantic love story between two unstable human beings. And I loved it!

After an eight-month lock-up in a mental health facility, Pat Solitano (Bradley Co0per) moves back in with his parents determined to win back his ex-wife. Pat’s plans get a bit complicated when meets Tiffany (Jennifer Lawrence), someone with her own mental problems.

Not only a romantic comedy, it’s an honest look at mental illness and the triggers that can cause psychotic episodes. Personally, I don’t blame them for their explosive behaviors. Pat’s family has a history of violent outbreaks and, frankly, the guy he pummeled deserved it. As for Tiffany, her problems came to a head after her husband’s tragic death. From each other, they find purpose and stability. The takeaway is that we’re all a bit mental. Especially when it comes to love.

“The only way to beat my crazy was by doing something even crazier.”

MY FAVORITE scenes are actually with Pat’s father, played by Robert DeNiro, a superstitious, compulsive sports gambler who wants to resurrect his broken relationship with his son. Everything has to be just right for his Philadelphia Eagles to win their games: He has to have his lucky handkerchief, his wife’s Crabby snacks, three perfectly aligned remote controls, and of course his son sitting by his side. Silver Linings Playbook is not just a romantic comedy, but a heartfelt look into the complicated bonds of family.

Love is rarely “love at first sight.” Or, if it is, we often deny it. I knew my husband Adam for a year before we had our first date. Unbeknownst to me, he was wooing me with plushy animals and candy for a year; I had no idea.  I guess that’s a common theme in life and in the movies. We miss the signals of love until we are struck by reality. We either love to be chased or love being chased. For me, my husband was definitely doing the chasing. In Silver Linings, Lawrence does all the chasing. And in Something Like Summer, Ben is chasing Tim, at least at first. Maybe it’s fun to be chased, but it’s thrilling to be caught.

Another great romantic movie. Cooper is great, but it’s Lawrence and De Niro that stand out in their eternal search for love.