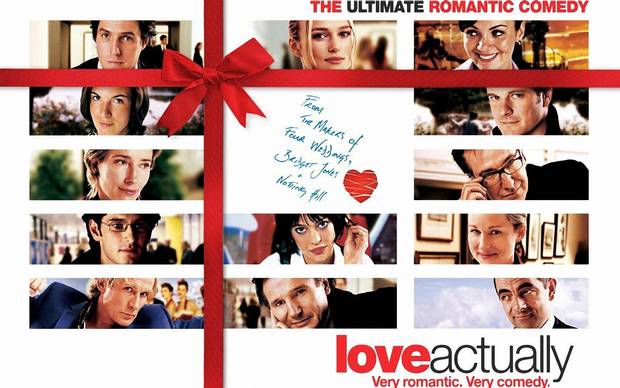 HERE’S A CLASSIC romantic movie that I just kept missing. Love Actually has a ton of British celebrities mucking about. Many, many more than those named above. Love Actually follows the lives and loves of nine couples. From unlikely pairs who fall in love to a few stories that don’t quite get a happy ending. And their stories — from the prime minister of Britain to a Portuguese housekeeper — are carefully woven together to create The Ultimate Romantic Movie. And indeed the tagline gets it right.

Several of the stories I loved in this movie. Love Actually kept me laughing and smiling all the way through. And yes, I cried a little, too, at the end. That’s what you want in a movie. Something to make you laugh a lot, and at the end reach for the tissues or your sleeve.

SOME OF the standout scenes are with Hugh Grant, as the prime minister who falls in love with one of his household staff. Grant has that sweet awkward charm that just makes you root for him. Some of the funniest moments come from Colin Firth, who plays a novelist who falls in love with his housekeeper. He speaks English and she speaks Portuguese. And yet without knowing it, they are speaking the same language.

Another cute bit is from Martin Freeman and Joanna Page as stand-ins for the performers in pornographic films. Although they are completely naked and in provocative sexual positions on-set, off-set they are shy and timid.

There are many more stories, but if you missed this little gem like I did, you’ll just have to catch it on Netflix.

MY FAVORITE scenes actually come from Love Actually‘s youngest cast member, Thomas Brodie-Sangster, as Sam (you may know him more recently as Jojen Reed in Game of Thrones). An 11-year-old who is in love with a popular girl who doesn’t even know he exists. He plans to learn to play the drums in order to woo her during the Christmas school play. His scenes are very innocent and sweet. I just kept cheering for him to get the girl. His one true love!

What I love are the unlikely pairings. An English 11-year-old falls in love with a popular American girl. A prime minister and one of his staff members. A cuckolded writer and a housekeeper.  A newly wedded wife and her husband’s best man. A bumbling English prat finding his true loves with hot American women.  And I think that’s where Something Like Summer comes in. It’s the unlikely pairing of Benjamin Bentley, timid high school nobody, and Tim Wyman, popular high school jock. It’s always fun to cheer for the underdog. And Love Actually has nine!

It made me laugh. It kept me smiling. And hardest of all to do, it made me cry.