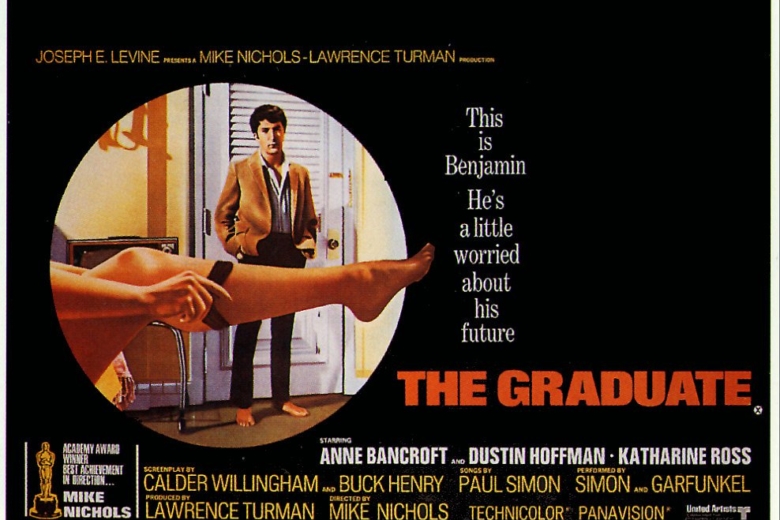 NOW HERE’S a great classic. I’ve seen iconic clips from The Graduate, but I’ve never actually sat down and watched the entire movie until now. It’s another unique entry in my countdown of 100 Films Before Summer.  It’s a time capsule from another era. And there is quiet energy pulsing through the movie.

Knowing that it’s the late 60s, you can just feel that The Graduate was produced during a time of great civil unrest. Women have not only entered the workforce, but now they are looking for greater equality. The civil rights bill gave African-Americans broader rights. The Vietnam War was raging. America was on the cusp of the sexual revolution. The film barely touches on any of this, but you can just feel the restlessness from Dustin Hoffman’s Ben Braddock and the music of Simon and Garfunkel’s haunting melodies.

But let’s start with plot, shall we? A young and sexy Dustin Hoffman plays recent college graduate Ben Braddock coming home to a party full of well-wishers. Ben is a bit lost and not quite sure what to do with his life after graduating. His aimlessness lands him in the house of his father’s business partner and into the arms of a woman (Anne Bancroft) “twice his age” (in real life, she and Hoffman are only six years apart).

Ben lounges in the pool by day; by night he’s having an affair with the mature Mrs. Robinson.  Their short relationship comes to a screeching halt after Ben has a first date with her daughter, Elaine, played by Katharine Ross. Even after several honest revelations, Ben is determined to still marry Elaine Robinson. He drives to Berkeley in an attempt to win her over despite the fact he slept with her mother.

OY VEY! This is just one effed-up Jerry Springer Show! I’m not sure I could date someone who also slept with one of my parents. That’s just far too complicated. What do we do at family gatherings? Will there ever be a family gathering? And what kind of future will we have? What’s so brilliant about The Graduate is all those questions and more play in your head at the end of the movie while a silent Ben and Elaine flee to an uncertain future. So much of the depth of this movie is played in the quiet moments. I really enjoy moments that prompt the audience to ponder. Unfortunately for the end of the movie, there is no single answer.

MY FAVORITE scene is of Mrs. Robinson’s not so subtle seduction. She’s certainly not coy and does everything possible to lure young Benjamin Braddock into her bed. It’s one of the more comical moments in an otherwise sad movie about a lonely alcoholic housewife, a restless graduate, and a desperate-to-marry daughter.

Don’t get me wrong, It’s a great movie. It just packs in a lot of sadness, too. The comedy picks back up in the third act with Ben chasing after Elaine.

So is The Graduate anything like Something Like Summer? Um … no. But the main character’s name is Ben too. That’s something, right?

Seriously, it’s a completely different kind of movie. It’s also quite brilliant in its daring 1967 screenplay. It pushed boundaries that I’m sure made a lot of people feel uncomfortable. I applaud its accomplishments. And the performances from Hoffman and Bancroft are wonderful. Two lost souls that need a little comfort in the darkness. As Simon and Garfunkel’s musical score ponders, “Hello Darkness, My Old Friend…”

In a way, that could be the connection between The Graduate and Something Like Summer. Ben and Tim, whether they are right for each other or not, are two lost souls just trying to find their purpose in the world. I’d like to think they can find their happiness, whereas the folks of The Graduate may be lost forever.

I have to give The Graduate some broken hearts. Lots of them. Only because there is a great sadness in these poor souls. I can’t help but ache for them to find purpose and happiness. Not all great movies have happy endings. Have you seen any French cinema?

You can stream The Graduate on Netflix and Amazon or you can just download it on iTunes.