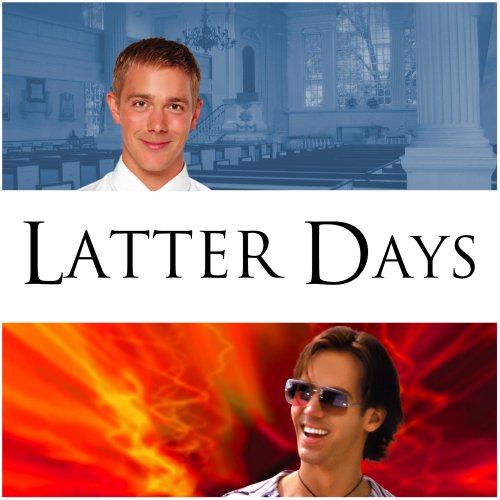 OH! HOW I’ve missed you, Latter Days. It’s one the best American indie gay films during a time when there weren’t that many good ones to go around. Thanks to a special request from Alan B., it makes it onto my list of 100 Films Before Summer.

Steve Sandvoss plays a Mormon missionary, Elder Aaron Davis, who arrives in Los Angeles to spread the gospel of Joseph Smith and The Church of Jesus Christ of Latter-day Saints. Aaron and his fellow elders move into a Los Angeles apartment, (in Silverlake, by the looks of the location) next to the very promiscuous and very beautiful Christian Markelli (Wes Ramsey). Aaron’s missionary life turns steamy when Christian tries to win a $50 bet by getting into Aaron magical underpants. Elder Aaron refuses to be another notch on Christian’s belt, and challenges Christian’s  superficial hypersexual lifestyle.

Latter Days has a star-studded cast, with Jacqueline Bisset, Joseph Gordon-Levitt, Mary Kay Place and Amber Benson. Sure, it’s great to see these stars taking their turn in an indie gay movie, but it’s all about Steve Sandvoss.

“Look at yourself! You’re so pretty and colorful on the outside, but inside you’re nothing but fluff. You’re like … you’re like a walking, talking marshmallow Peep.”

I’VE ALWAYS loved this line. The way Aaron simultaneously speaks from innocence and wisdom is mesmerizing. That said, Latter Days is not a perfect movie. But C. Jay Cox’s perfect-pitch writing and casting of Steve Sandvoss outshines any cinematic shortcomings. He singlehandedly gives Latter Days its heart and soul. And every minute of Sandvoss makes you ache for more.  He’s completely watchable and shines in every scene.

This is a pretty amazing movie for challenging the Mormon church at a time when the church was so publicly and flagrantly condemning gays and lesbians. It’s also around the time the Massachusetts Supreme Court gave same-sex couples the right to marry. I think many gays and lesbians like myself that thought we had to turn our backs on religion were now trying to find a balance between our sexuality and our spirituality.

Latter Days explores not only the existence of God, but even explores the possibility that God accepts homosexuality. Through a series of serendipitous moments Christian finds his way back to Aaron after losing him. I love that C. Jay Cox chose the name Christian for the bed-hopping Hollywood gay. Clearly, the writer believes that we are the same and it makes no difference who we take to our beds.

“You want revelations engraved in gold and angels trumpeting down from heaven. What if this is it instead? Me telling you I love you, right here in the snow? I think that is pretty miraculous.”

FAVORITE SCENE Sigh. This is the one: Out in the cold, outside the Salt Lake airport, Christian professes his love for Aaron. It’s a beautiful moment in an unexpected setting. And from a production standpoint, probably a lot of fun to do. I learned the scene was shot on a warm day; the snow is fake and the sight of their breath was added digitally in post-production. As long as the characters are passionate, it doesn’t really matter if the scene is “real” or not.

A movie hinges on the appeal of the main characters. Do you like them? Can you identify with them? Will you root for them? C. Jay Cox succeeds in finding two remarkable actors to tell his story. And for Latter Days, it’s the actors who drive the story and not the other way around. It’s what we’re doing for Something Like Summer right now. We are searching for remarkable actors to play Ben and Tim. Actors who bring their own charm and sense of wonder to the script. I believe if you find the perfect actor for your story, as a director, half your work is already done.

Latter Days is a classic must-watch gay romance. Steve Sandvoss’ performance soars in this tale of man torn between his religious beliefs and his sexuality.

Latter Days is available everywhere. Watch it on Amazon Instant Video, buy the DVD or download it today on iTunes. Also, it is coming later this month to Netflix streaming.