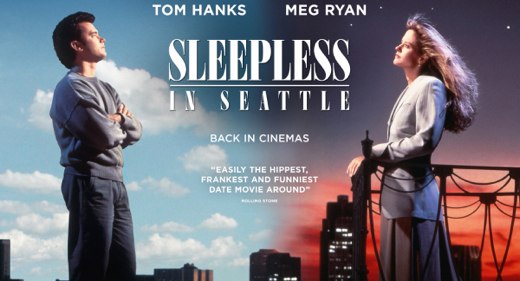 CAN YOU find true love twice? There are people out there who don’t believe in fate. Life is just a random jumbled up mix of coincidences and accidents.

In Sleepless in Seattle, Meg Ryan’s Annie Reed says, “Destiny is something we’ve invented because we can’t stand the fact that everything that happens is accidental.”

But later, the more she falls in love with the man she’s never met:

Annie Reed: Now that was when people KNEW how to be in love. They knew it! Time, distance … nothing could separate them because they knew. It was right. It was real. It was…

Yeah, I admit it. I want a love just like the movies. I want to always love love. I’m deeply romantic. And just so you know, I think I found The One.  It’s not always a sweeping romance. But I bet if they took highlights from our lives it would be a sweeping romantic movie. I do believe in something more. Dare I say it, I believe in destiny. Kismet. And fortune. I believe in love.

And that’s the plot of Sleepless in Seattle. Sam Baldwin (Tom Hanks) and his young son, Jonah (Ross Malinger), have had their world torn apart by the death of wife and mother, Maggie. Eighteen months later, Jonah is coping better with the loss, while Sam continues to mourn over sleepless nights.

Jonah decides to take action by calling a nightly radio show host for advice.  With both Jonah and his father Sam on the phone, they start to work out their grief while countless people hear their story over the radio. The radio host gives Sam the nickname “Sleepless in Seattle.”

Meanwhile, across the country Annie Reed, played by Meg Ryan, becomes obsessed with the man the country only knows as “Sleepless In Seattle.” Annie uses her detective prowess as a journalist to track down the man behind the moniker. Upon finding his name and address, she writes him a letter that is heartfelt and honest. Based on the perfect romantic movie, An Affair to Remember, she asks that they meet in New York City at the top of the Empire State building on Valentine’s Day. Oh, one little problem. Annie is engaged to a perfectly nice allergy prone fiancé (Bill Pullman). It’s not a magical romance, but it’s nice.

This might all sound a little stalker-y, given that she also flies to Seattle in a botched attempt to meet Sam face to face. But it’s all played quite innocently. It helps that Jonah, unlike his father, believes Annie Reed is perfect for his father. And it also helps that even though Sam doesn’t know who Annie is yet, he does see her and is instantly taken by her presence. It’s magic, folks! Love at first sight. So, will they meet on top the Empire State Building? Well, If Jonah has any say…

MY FAVORITE characters are young Jonah and they very funny Becky (Rosie O’Donnell). They are like little cupids ushering our main characters up a building in New York.

From my own experience, I can say, yes, love is possible. It’s not always a guarantee, but anything is possible. I believe movies reflect our lives. We don’t want to live in a movie. We want movies to live in us.

Sleepless in Seattle was one of the great romcoms of the Nineties. Featuring Tom Hanks and America’s Sweetheart, Meg Ryan, it’s the quintessential modern romance.

You can stream Sleepless in Seattle on Netflix or Amazon, or buy your very own copy.