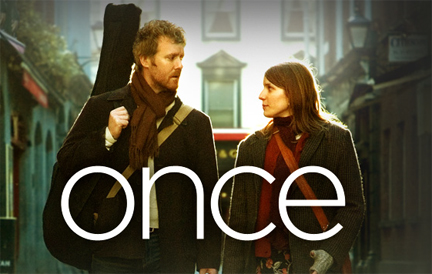 I HAVE been thinking a lot about music lately. And Something Like Summer will have plenty of musical compositions. From songs sung by our lead actors to a musical score. So I’m all for watching interesting ways that movies incorporate music. From straight-up musicals like Were the World Mine and Moulin Rouge to the more subtle inclusion of music as in Woody Allen’s Annie Hall and Matt Smith’s tour de force in Christopher and His Kind. By the way, all these movies are love stories and hold a special place in my heart.

So of course, at writer-producer Carlos Pedraza‘s urgings, I watched an Irish film with a very powerful musical bent, Once. What makes Once so moving is the way music is seamlessly incorporated into the plot of the movie. It’s a movie about music and how music can bring two people together. The lyrics are daring and whimsical. There’s even heartbreaking powerhouse songs with a raw energy that makes your heart pound. Yep, I loved it.

A DUBLIN busker, Guy (Glen Hansgard), sings and plays the guitar by night and works at his father’s Hoover repair shoppe by day. A young unnamed Czech girl played by Markéta Irglová interrupts his playing one day to ask him a series of probing questions. Upon learning he also fixes vacuum cleaners, she excitedly asks for him to fix her broken one. One day later, she’s back, vacuum in tow, dragging it through the streets of Dublin like a dog on a leash.

Guy learns more about this new girl — she also sings and plays the piano. They soon start to sing together and eventually record an album together. It’s very clear they are falling in love with each other but it’s complicated.

Not only does the girl have a young daughter and a husband faraway, Guy has an ex-girlfriend he’s not quite over. He hopes his music will win her back. Can this Guy and Girl ever have a chance to be together?

Although the Czech is not translated in Once, a quick search tells me she says,

MY FAVORITE song is “Lies.” It’s impossible to discuss Once without talking about its soundtrack. You could almost call this more music than dialogue. One cannot exist without the other. It’s beautiful just the way it is. “Lies” reveals the pain and sadness of losing someone you love with every fiber of your being. It’s meant to be sung loudly and full of emotion. Once’s haunting music even won an Oscar for Best Song, and the film was adapted to the stage; it’s on Broadway through January 2015.

Two artists coming together being better together than they are apart. Yes, that’s Once, but it also sounds a lot like Something Like Summer. The only problem with love is whether or not you meet each other at the right time. You could be too young, too old, not ready for a relationship. You could be going to different schools, or your interests diverge — timing is everything. Personally, I believe I met my own husband at the right time. If I had met him earlier, I may have ignored him. Later, and I might have met someone else.

And that’s Ben and Tim in Something Like Summer. They meet each other, but is the timing right? Can they be together so young? What do they need to learn from each other and without each other to mature? How do they become better lovers, friends — better people. It takes time. For Guy and girl, their future is still unwritten. For Ben and Tim … well, I guess you’ll have to wait for the movie. Or if you love spoilers, there’s always Jay Bell’s tell-all “Something Like…” series of novels.

This is one very lucky low-budget movie with high-octane music and an engaging small cast. It’s the music that really reels you in, and its ending deserves some broken hearts. Sigh. Maybe someday.

You can reserve Once on Netflix DVD or head over to Amazon to stream or buy your very own copy.