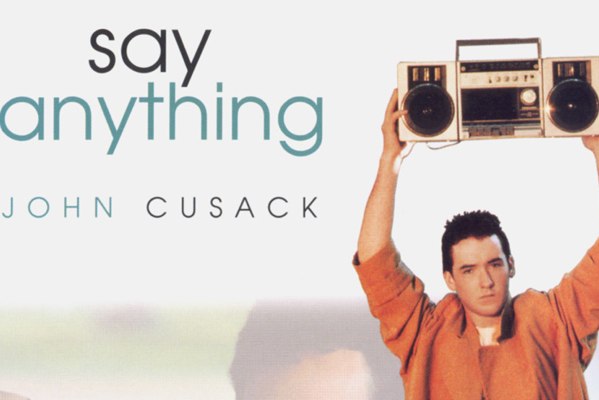 YOU ALREADY know from my review of Sixteen Candles, I love both John and Joan Cusack. Well here they are again in Say Anything Dot-Dot-Dot. Do you put four dots or just three? Or do you try really hard not end your sentences with the title of the movie? There’s my additional challenge in reviewing Say Anything… period.  Damn.

What is it about John Cusack I just love? Maybe it’s that quirky sense of humor. That awkward ramble that just makes me gush. His sister has it in spades. The actors whom I root for have more than good looks and talent. They have this pulsing energy just beneath the surface. As if they hold the secrets to universe that no one else really understands.

Most people don’t have their crap together upon graduating high school. And John Cusack’s Lloyd Dobler is the king of underachievement. He is basically your average teenager without a clear future. Except when it comes to the girl of his dreams, Diane Court (Ione Skye). If there is anything Lloyd can do well it’s being the perfect boyfriend to Diane Court. She is beautiful, smart, and — unfortunately —  on her way to England after winning a fellowship. Why would a girl who could have anyone want Lloyd Dobler? Can their relationship endure beyond a summer fling?

MY FAVORITE scene is their rather intimate sex scene in the car. It’s not particularly sexy or even graphic. It’s quite simple, really. Lloyd is shivering in the scene. And it’s not from the cold, but from pure joy and excitement.

Has that ever happened to you? Being in a moment so wonderful, so exciting that you cannot stop this involuntary shivering. It’s a very sweet scene. Lloyd has found the woman of his dreams, and she loves him back. Now, he just has to figure out how jump over the hurdles of Diane’s skeptical father and the faraway university Diane will be attending in the fall.

I love underdogs. Have you noticed that yet? I love to root for people who normally wouldn’t get the girl/boy, the job, or whatever it is they desire. But they keep trying. They don’t give up. And that seems to a common theme in these 100 Films Before Summer.

Like Lloyd Dobler of Say Anything…, Ben Bentley is the underdog of Something Like Summer‘s story. He’s crushing over the most handsome boy in school. And yet by dint of charm and his sneaky ways, he creates an opportunity to get closer to Tim Wyman. These underdogs are fascinating to watch. Not because they are beautiful, but because they are charting a different path from “normal” people. They are fearless in their tactics, and yet they still cripplingly full of doubt.

MOVIES ARE LESSONS, inspirations for us to try harder in life. They demonstrate it’s okay to fail, but we have to get back up and try again. Movies can push us to be better people and to think from another person’s perspective.

The “root for them” quality has become an important criterion for us in casting the role of Ben. We want an actor who embodies that in addition to being a great actor and singer.

It’s not the strongest movie on my list of 100, but John Cusack’s and Ione Skye’s performances shine in this simple love story. This one is great watch if you want to see a young Cusack doing his thing – being a star.

You can stream Say Anything… on Netflix and Amazon or buy the special 20th anniversary DVD.