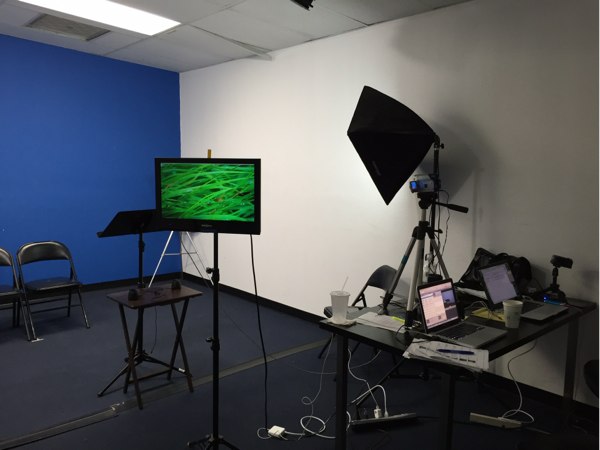 Blue Seraph Productions’ audition facility in Hollywood for Something Like Summer callbacks.

HOLLYWOOD — After a summer of reviewing thousands of actor submissions for the lead roles in Something Like Summer, the film’s production team called back almost 50 actors for auditions, and things look promising.

“Casting an independent feature is a long and involved process,” explained Summer writer and producer Carlos Pedraza. “We began a nationwide search months ago, reaching out to actors and agents not just in New York and Los Angeles, but in places as varied as Toronto, Vancouver, Atlanta, Orlando, Chicago and St. Louis. We even looked seriously at talent from Australia.”

Director J.T. Tepnapa added, “We needed to find the right Ben. The right Allison. The right Tim.” And things are looking good.

All the actors called back for the October 2-3 auditions had previously submitted videotaped auditions this past summer. That was after thousands of initial submissions in the spring. “It’s a constant effort to narrow the field, and there’s a lot to consider,” Carlos said.

The team conducted live callback auditions last week with actors in Hollywood and held a number of auditions via Skype.

JUST THE START “We think a lot about who these characters are, and what combination of ‘look’ and personality an actor has to achieve,” Carlos added. “And that’s just the start. From there, we stake out a specific strategy for each of the roles. We used a different process for Tim than we did for Ben and Allison, and probably different from what we’ll use for Jace, the Bentleys and the rest of the cast.”

The production hopes to announce casting for the lead roles in the coming few weeks, as offers go out to actors and their agents.

BE THE FIRST to find out who has been cast for the leads in Something Like Summer. Sign up for our newsletter, because subscribers will be the first people to read our casting news.