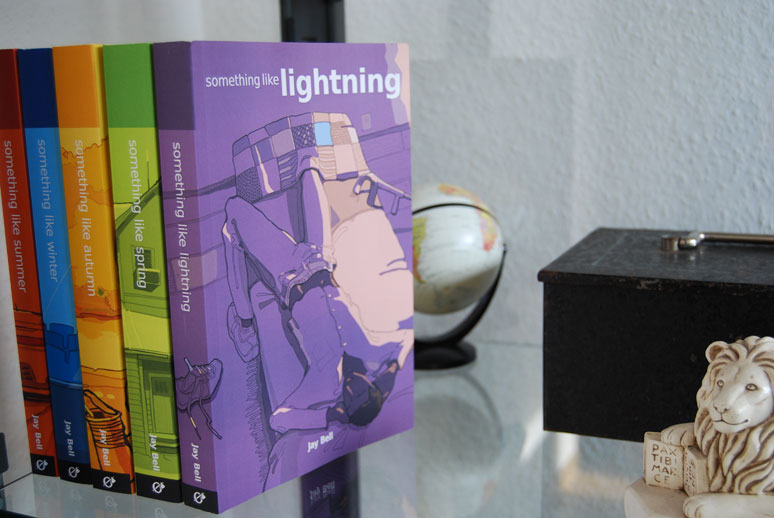 AUTHOR JAY BELL posted a guest blog yesterday on the Prism Book Alliance website, in which he waxed eloquent on how “love is a mess,” and waxed generous in offering to give away a copy of the final book of his Seasons series, “Something Like Spring.”

Jay guest-blogged on the even of the release of his latest book, a spin-off from the Seasons series, “Something Like Lightning.” It’s the first of what he’s calling the Storms series. The sequel has already been titled (but not written), “Something Like Thunder.”

The new novel follows out-and-proud Kelly Phillips, a not-so-sympathetic character introduced in “Something Like Spring.” But as we’ve seen in Jay’s other books, the last book’s antagonist can become the following story’s hero; it’s part of what makes finding romance such a messy process, as he explains in the blog post:

Love is a goddamn mess. Even when it works right … love remains a huge clumsy beast that will knock over your favorite things in the middle of the night before accidentally crashing through a window and puking on the hood of your car. And it’s wonderful! It truly is. But it takes patience.

Jay notes that readers probably didn’t get the best impression of Kelly in ‘Spring, “which is why I felt he deserved a second chance,” he explained. So if you’re thinking of picking up “Something Like Lightning,” meet Kelly in the preceding book.

THE CONTEST To enter, leave a comment on the page where Jay’s guest blog is posted. A winner will be chosen randomly from commenters. If you win, you can choose whether you want your copy of ‘Spring’ in paperback or eBook format.