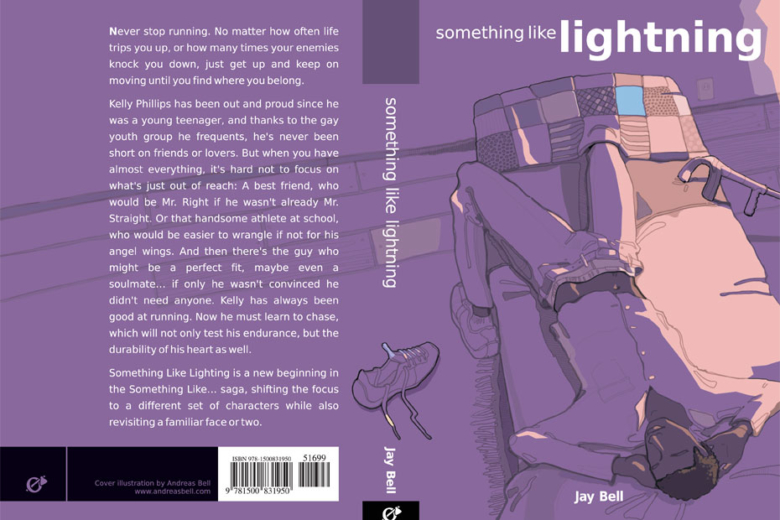 WITH THE conclusion of the Seasons series earlier this year with “Something Like Spring,” author Jay Bell is set to release the first of a new series of novels — the Storms books.

Never stop running. No matter how often life trips you up, or how many times your enemies knock you down, just get up and keep on moving until you find where you belong.

The first novel is “Something Like Lightning,” which Jay describes as “a new beginning in the ‘Something Like …’ saga, shifting the focus to a fresh set of characters while also revisiting a familiar face or two.”

Kelly Phillips has been out of the closet since he was a young teenager, and thanks to the gay youth group he frequents, he has never been short on friends or lovers. But when you have almost everything, it’s hard not to focus on what’s just out of reach: A best friend, who would be Mr. Right if he wasn’t already Mr. Straight. Or that handsome guy at school, who would be easier to wrangle if not for his angel wings. And then there’s the one who might be a perfect fit, maybe even a soulmate… if only he wasn’t convinced he didn’t need anyone at all. Kelly has always been good at running. Now he must learn to chase, which will not only test his endurance, but the durability of his heart as well.

ON HIS blog, Jay explains how the Storms books — “Something Like Lightning,” which will be followed by a sequel, “Something Like Thunder,” (lightning always comes first, he reminds us) — fit thematically with the books in the Seasons series.

“Rest assured that this book fits in well with the rest,” he says, “falling in love, finding one’s place in the world, making a few friends along the way — all that good stuff.”

“Something Like Lightning” will be available both in paperback and eBook editions from a variety of sources: