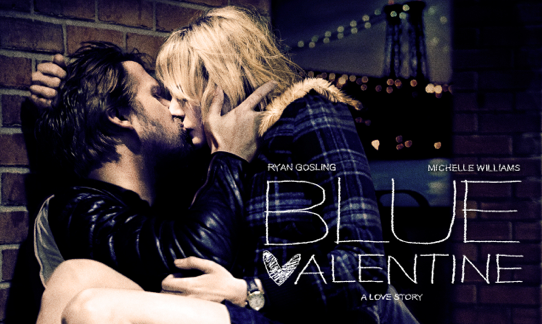 Blue Valentine has been on my must-watch list for a while. I knew it wouldn’t be a fun movie to watch,  but I didn’t really expect it to be as heart-wrenching as it was.

Most romantic movies are about falling in love. The first kiss. The first time they make love. And all the quirkiness along the way to falling in love. For Blue Valentine, that’s all in the past — a backdrop to what is actually going on in the present. It’s a marriage rapidly going off the rails.

Dean and Cindy, played by Ryan Gosling and Michelle Williams, have settled into their married lives. They nitpick each other, inexorably tearing each other apart. After five years of marriage and raising a little girl, Cindy is drifting away while Dean can barely keep himself and his family together. But it wasn’t always so bad.

In flashbacks, Dean courts Cindy with his ukulele and weird singing voice (his words, not mine). They’re seemingly perfect for each other, full of passion and lust. I ask myself, what happened? Why is this marriage falling apart? There is no single answer. It’s a million little things that add up to one very sad ending that began so happily.

I LOVE the cinematography in Blue Valentine.  All the scenes pre-marriage were shot on Super 16mm and everything after the wedding was shot on the Red One. It was a great way to break up present day with the past.

If you play on the strengths of each camera, Super 16mm feels more romantic, almost like a forgotten past, while digital can feel more stark. The director wanted to shoot the story five years apart, but naturally, due to budgets, he had to shoot his movie in one go.

That’s basically what we have to do with Something Like Summer, too. I’m sure nobody wants to wait 12 years to see this movie made, though some filmmakers are just crazy enough to do it (i.e., Boyhood).

Sidenote: Although the sex scenes are visceral, they’re not as explicit as most R movies. Unfortunately, the MPAA disagreed and gave Blue Valentine an NC-17 rating. After a campaign led by the actors and the Weinstein Company, the ratings board relented and gave this movie a proper R rating. The MPAA has a history of rating movies based on sexism and homophobia. For more on that, you can check out the telling documentary, This Film is Not Yet Rated.

The story continues even as the credits come up. It keeps going after the last line and the last image. Blue Valentine tells two stories: the romance is only in the past. The real heartbreak is what happens following Happily Ever After. That’s bit like Something Like Summer, too. You get the tumultuous journey of not five years, but twelve years. You watch Summer‘s Ben and Tim go through a lot of growing up. It’s not always pretty, but it’s life. They’re not all happy endings, but if you’re lucky, it’s a hell of a journey.

It’s certainly not the most romantic movie on the list. But it’s a heartbreaking story with phenomenal actors in the leads. You just want happy endings for these lost people. Even if it’s just not meant to be.

You can stream Blue Valentine on Netflix or head over to Amazon to stream or buy your very own copy.