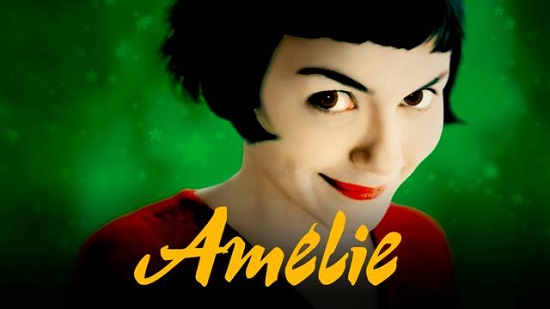 HERE’S A romantic entry that is sure to be on my top 10 list by the time I make it through 100 Films Before Summer. And in many ways it’s a surprise entry for me. Before Amélie, I would have told you that French cinema is terrible. They’re weepy, they’re overwrought. They’re all plotless dramas or slapstick comedies. Amélie changed everything. It really changed the way I look at movies. It changed what kind of filmmaker I want to aspire to be. It takes the ordinary of life and makes it extraordinary. It inspires me to look closer at life and find the magic already around me.

Even today, I love sounds of cracking crème brûlée (I even learned to make it myself). And I have this strange love and fascination with garden gnomes. And someday, I’ll make my own whimsical tale in the same vein as Amélie.

Amélie Poulain, played by Audrey Tautou, is a quirky little girl. She likes to eat raspberries off her fingers, loves the feeling of glue peeled off her fingers, believes records are made like pancakes, believes in imaginary friends and thinks the neighbor’s comatose wife has chosen to get all her life’s sleep in one go. As a grownup, Amélie is just as fascinated with the little things in life, like digging her hands in a mound of dry beans and cracking the surface of crème brûlée (she’s right, it is fun!).

After finding a tin box of childhood treasures behind one of her bathroom tiles, she tries to search for the original owner. If she’s successful, she’ll become a regular “do-gooder” and help out people for the rest of her life. Well, she does find the original owner, a broken down old man. However, his box of childhood dreams inspires him to reconnect with his children.

Now inspired, Amélie embarks on a mission to help people in need — and punish a rather nasty vegetable seller. On her way to making other people happy, she meets Nino Quincampoix, played by Mathieu Kassovitz. And he has his own sense of wonder. He hunts beneath photo booths for unwanted photos and places them into his photo album. When he loses his album after a chase, Amélie picks it up and creates a game for Nino to play for his lost album. She is definitely curious about the Nino. But will she allow herself the love and happiness that she’s given to others?

FAVORITE SCENE I have watched this movie so many times, it’s hard to pick out any one scene as a favorite moment. Overall, I love the way the film looks, I love all the intricate camera moves that make each scene dynamic and magical. Each character has his or her own unique story and arc. It’s just a well crafted story from script to screen.

Amélie is full of wonder. It’s beautifully told. And although it’s very different from Something Like Summer, I certainly want to tap into the wonder and uniqueness of each character. It won’t be as fantastical as Amélie, but it’ll definitely have its moments.

Amélie inspires me to make Something Like Summer a great movie, from my heart. It shows what great stories and great directors can do. Amélie is an achievement that fuels my passion as filmmaker.

Do you want a peek into the brain of J.T. Tepnapa? Amélie would be a great start. It’s fascinating that one of favorite films would come from French cinema. I have watched so many more European movies because of Amélie. Nominated for five Academy Awards and winner of 55 awards around world, it’s a must-watch for its heart-pounding story and breath-taking cinematography. Yes. It’s five sparkling hearts. I’d give it six if I could.

You can stream Amélie on Netflix or head over to Amazon to stream or buy your very own copy.