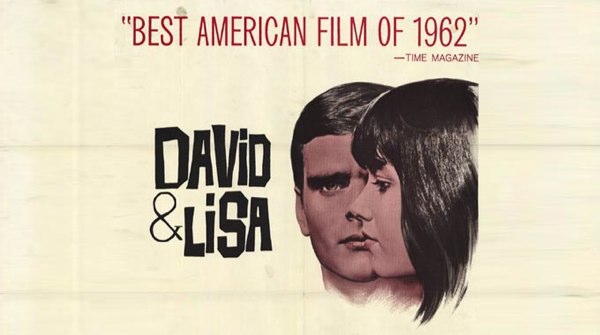 HERE’S MY first black and white entry into 100 Films Before Summer. It’s another strange entry like Don Jon and The Graduate. I watched this one at the urging of my friend Carol. She watched it as a young adult going through some pretty tough times. David and Lisa resonated with her, and I wanted to know why.

What is it about mentally unstable people that just draws me in? Like Silver Linings Playbook, we have another mental love story. This time between an untouchable obsessive-compulsive genius, David Clemens (Keir Dullea), and a rhyming double-personality girl by the name of Lisa (Janet Margolin). Janet is also Muriel, a girl who doesn’t talk, but can write. In their treatment center they learn how to cope with the outside world and their inner feelings. Together they form a special bond and slowly learn how to overcome their mental disabilities.

This is 1962. So you’ll have to forgive a lot of dramatics that surround this story. In moments of panic and stress, the actors seem to overact their ailments. They wear their crazy like a stuffy overcoat rather than embody what it might mean to really have a mental disorder.

However, in the quieter moments, David and Lisa is sweet and tender. Like all great love stories, they need each other to overcome their problems.

The mental facility is a fascinating look into the past. I swear the character of Simon, played by Matthew Anden, is institutionalized for homosexual tendencies. Another character is a sex addict. And there might even be a lesbian, too. All of this goes unspoken. We’ve come a long way in our treatment and classification of mental disorders. Most of these kids need their family’s love more than a treatment facility.

MY FAVORITE scene takes place at the Philadelphia Museum of Art. Lisa is drawn to this sculpture of a mother, father and child. She is so taken by the sculpture that she climbs onto it and embraces the figures, as if she is a part of the family. David almost touches her, almost pulls her away. To me it describes what these kids need — love.

Well, Ben and Tim aren’t really mentally unstable. But they are artists. And you have to be a little nutty to be an artist in this life. People don’t quite understand you, but they are drawn to you with this unseeable force. And like-minded people are drawn together, too. David and Lisa need each other. They understand each other like no one else can. It’s the same for Ben and Tim. They understand each other’s needs and desires. It’s as if one plus one equals more than two. It’s infinite.

It’s a bit over-the-top in parts and the score drowns out some pivotal moments, but the story between David and Lisa is subtle and honest. It’s an interesting watch. If you’re not interested in the original black and white version, you can always try the TV movie version made in 1998 with Brittany Murphy and Lukas Haas.

You can select David and Lisa on Netflix DVD or head over to Amazon to buy your own copy or watch streaming if you have Amazon Prime.