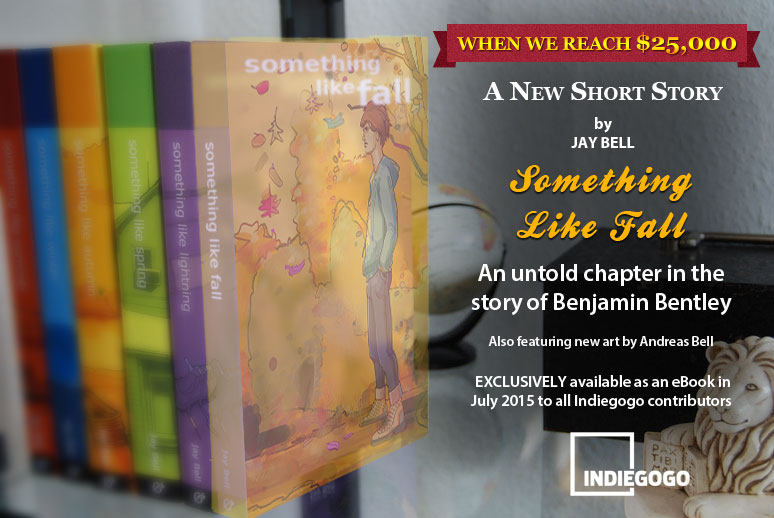 FANS OF the novel, “Something Like Summer,” who contribute to the film’s Indiegogo campaign may get an exclusive “missing chapter” to the story of Ben and Tim.

“Ben is arguably the most important character in the series, and yet his book is the shortest,” notes author Jay Bell, who aims to remedy that by offering all Indiegogo contributors a new Ben story once the campaign gets to 25 percent of its goal.

In an Indiegogo promotion launching today, the film’s producers are offering this new perk to everyone who contributes to the $100,000 campaign to bring the book to the screen.

“$25,000 is the magic number,” Jay says, “and this new story, ‘Something Like Fall,’ is my answer to the many people who have asked if there will be another book from Ben’s point of view.”

The story of Benjamin Bentley and Tim Wyman formally concluded in Jay’s fourth book of the series, “Something Like Spring,” but Jay adds, “I’d been toying with the idea of writing a ‘missing chapter’ of ‘Summer.’ Writing from Ben’s perspective again will be like reuniting with a dear old friend.”

Jay talks about the new story and the other Indiegogo perks in his latest video:

Jay’s books have created such a community online that the film’s producers decided to offer the new story to everyone who contributes any amount to the campaign. “Tying it to a specific goal — $25,000 — moves the campaign forward,” says writer-producer Carlos Pedraza, “while also allowing us to give back to every contributor, no matter what level they can afford.”

BUT FIRST, the campaign has to get one-quarter of the way to its $100,000 goal. You can contribute at the Indiegogo campaign page, and more importantly, share with your friends and other fans of Jay’s books.

Everyone who contributes at any level on Indiegogo is entitled to receive this exclusive eBook edition of “Something Like Fall,” due in July 2015 with new art by Andreas Bell, once we reach the $25,000 goal.

The Indiegogo campaign to produce the film, Something Like Summer, continues until Sunday, December 14.