79. An Affair To Remember 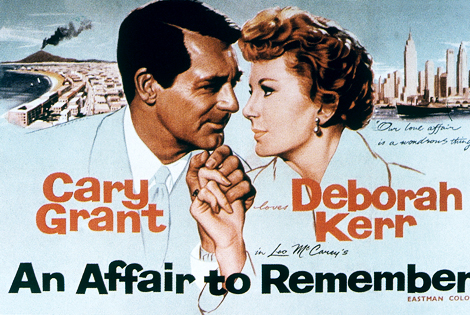 79. An Affair To Remember

YOU MAY have noticed 100 Films Before Summer  has been on a bit of a hiatus. We ran a successful Indiegogo campaign in November and December that took up a lot of time. But now that the campaign is over, I can devote more time to 100 Films. By the way, if you still want to contribute to the campaign (and be eligible for the exclusive new story by Jay Bell, “Something Like Fall”), you can by contact me directly.

Not that I have stopped watching movies, I recently saw Interstellar and Whiplash. Very different movies, but both powerful stories that made me laugh and cry. But let’s get back to the reviewing, shall we?

After watching Sleepless in Seattle, I had to put An Affair to Remember on my list of 100 Movies Before Summer. I love watching older movies and seeing how they were made. The sets aren’t as complex as they are today. You can easily pinpoint when they are using a real ship or are just in front of a few flats or a rear-projection screen. Although the sets may not be as extravagant as today, the passion for good stories that move audiences was just as clear in 1957 as it is today.

Nickie Ferrante (Cary Grant) is a well-known playboy, adored by women all over the world. He’s famous for being famous with no real money of his own; he just dines with the very rich. He finally decides to settle down and marry an heiress.

However, while on a transatlantic cruise, he falls in love with the beautiful, smart and sassy Terry McKay (Deborah Kerr). This obviously adds a wrinkle to his plan to marry rich. If Nickie truly loves Terry, he’ll need to get a job – his most promising prospect is as a painter – and make enough money to support the both of them. If all goes well, they’ll meet atop of the Empire State Building. Unfortunately, as real life shows us, things don’t go according to plan and this love story has a tragic twist.

“There must be something between us, even if it’s only an ocean.”

Yes, this one’s an epic romance, all about finding your true love. These stories keep on getting told over and again. What is this thing called love? Why is it so powerful? As I watch more and more movies outside the “romance” genre, I still see love in many different forms. I’ve so far been focused one kind of love – romance – but there’s also the love between a parent and child. That kind of love is powerful, too. And there is love we can give ourselves.

In An Affair to Remember, we focus on the story of Nickie and Terry, but that’s not the most important love in the film. It’s really about how Nickie needs to accept that his playboy life is a facade to cover up his desire to be painter. Only after he truly accepts himself as an artist, can he finally follow his true love. That’s the real love story. Maybe all movies are love stories?

Take the drama I just saw, Whiplash, and the science fiction movie, Interstellar. Maybe they, too, are love stories. In Whiplash, a talented drummer is nearly driven insane perfecting his art, pushed by a ruthless, manipulative teacher. Sounds pretty drama-y, doesn’t it? But maybe it’s about love. This talented drummer must find the confidence to push past someone else’s expectations, to exceed them and become his own man. He must love who he is before he can truly become great.

And Interstellar? Yes, it’s a science fiction adventure about saving our dying planet. It’s a huge blockbuster movie with thrilling rides. But at its core, it’s a story about a father’s love for his daughter. And it’s a better movie because of that bond.

In my previous reviews, I have been telling you how the plots are like Something Like Summer. This actor does this just like Ben. Or that particular scene is similar to a scene I want to shoot. But that’s not really enough, is it? I mean, plot is great. It’s a good road map of where we need to go. But aren’t the stories we tell what’s really important? And by story, I mean, what is the message?

An Affair to Remember, is a story about a man following his heart and dreams, living up to his fullest potential so he can become a great man who deserves a great woman. That’s not necessarily in the text of the screenplay, but it’s certainly the message you get watching the movie. And that, folks, is exactly how An Affair to Remember is like Something Like Summer.

Did I just review three movies? Wow, this is certainly wild entry. But I’ve been having a bit of wild time. My mind is exploding with clarity. As for An Affair to Remember. It’s a classic I highly recommend.

You can stream An Affair To Remember on Netflix or Amazon, or buy your very own copy on DVD or Blu-ray.