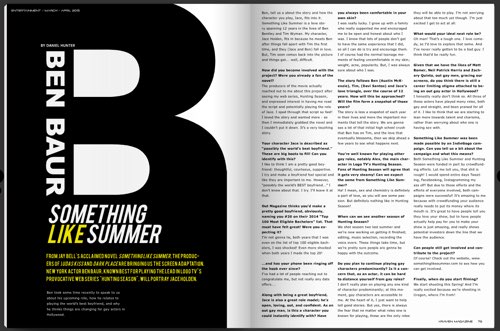 KRAVEN MAGAZINE talks with Ben Baur about the new season of his show Hunting Season and the perils of playing the best boyfriend in the world in Something Like Summer.

The interview appears on pp. 78-79 of the March/April issue of the San Francisco-based Kraven, which describes itself as “a new voice,” an international digital gay publication available in more than 90 countries.

“Kraven Magazine is the voice that dares you to become the best your can be,” its masthead reads. “It provides bold, engaging content that challenges, nurtures and entertains in a variety of categories including: Fitness, Well-being, Cuisine, Relationship, Fashion, Queer & Social Justice, Evolution, Interviews, Travel, and our very own original Fiction.”