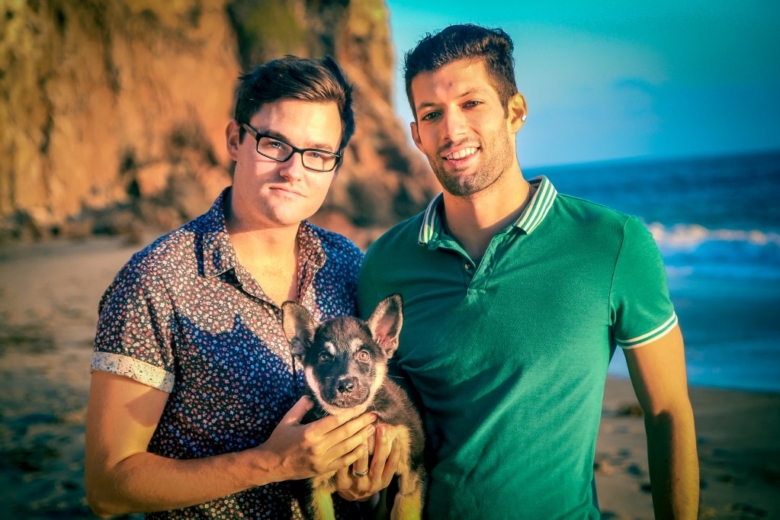 NEARLY 200,000 subscribers follow Will Shepherd (left) and fiancé R.J. Aguiar at their YouTube channel, Shep689: A Gay in the Life. Fans of the novel, they’ll play a police officer and one of Ben and Tim’s teachers in Something Like Summer.

Both YouTubers are appearing in several upcoming films, including Kiss Me, Kill Me and Such Good People, which opens in theaters in April.

“I’m very, very down for something physically involved like the cop role,” R.J. said, “and Will is going to be great as the guys’ Spanish teacher. It’s kind of an inside joke for me and my family since they always joke that he speaks better Spanish than I do.”

Director J.T. Tepnapa said he’s “really excited about these parts for both guys.”

Both Will and R.J. are fans of Jay Bell’s novel, “Something Like Summer,” and have promoted it (and its sequels) heavily on their YouTube channel and their website, NotAdamAndSteve.com.

“I became obsessed,” Will wrote about the book. “I think it had something to do with reminding me of how life was like for me in high school. … I fell for a guy who wasn’t ready for any kind of emotional relationship; he was only interested in a physical one. … You [will] find yourself being wrapped up.”

Will encouraged his nearly 80,000 Twitter followers to contribute to the Something Like Summer its successful Indiegogo campaign in December. “We really appreciated his vocal support,” said writer-producer Carlos Pedraza, “and it made sense to seek them out to collaborate with the actual production.”

Carlos and J.T. met with Will and R.J. in Los Angeles earlier this year to explore the possibilities, which include the two featured roles and the duo’s vlogging from behind the scenes while they are on set this summer.

“WE KNOW fans are intensely curious about how the novel is being adapted for the screen, and in addition to the video production diary we’re producing ourselves for Indiegogo contributors, Will and RJ’s vlogs from the set will give a near real-time, fans’-eye view of the project,” Carlos said.

Will is a Florida native, and a recent graduate of Florida State University (math and statistics). He met RJ while attending college. R.J. is the son of Cuban immigrants who settled in Tampa, Fla. Following the explosive success of their video blog, they moved to Los Angeles to pursue their YouTube dreams. In addition to their channel’s nearly 200,000 subscribers (and 43 million views), Will also runs a popular gaming channel with its own 46,588 subscribers.

The two also produced their own short film, The OMEn Chronicles, a magical fantasy-adventure.