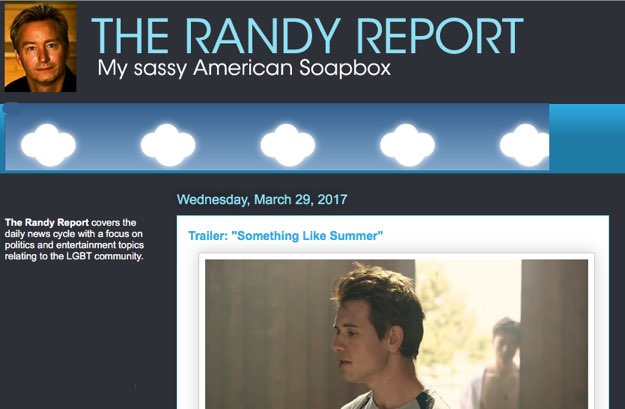 THE RANDY REPORT shone a spotlight on the recently released trailer for Something Like Summer. Writer-editor Randy Slovacek produces one of the most popular political, pop culture and entertainment blogs of interest to the LGBT community.

The Randy Report encouraged its readers to “check out the trailer to Something Like Summer, the film adaptation of Jay Bell‘s Lambda Literary Award-winning novel* of the same title.”

Read the article at The Randy Report »

The Randy Report, based in Nevada, also produces one of the Top 20 LGBT podcasts rated on iTunes, and the blog receives about 200,000 visits a month.

Past podcast guests have included:

Slovacek promised to continue to cover Something Like Summer as it nears release.

*The novel was actually a Lambda Literary Award finalist. Author Jay Bell has been nominated for and won the award for other works.