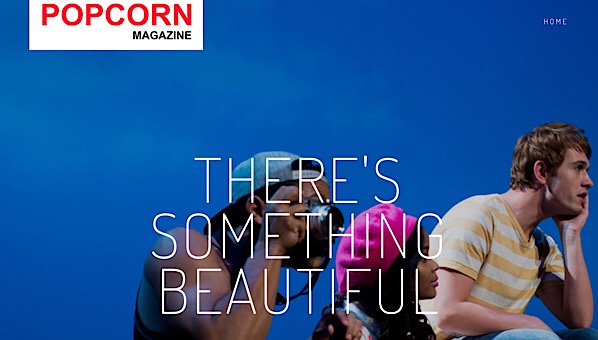 AUSTRALIA’S POPCORN Magazine caught up with Something Like Summer stars Grant Davis (Ben) and Davi Santos (Tim) while they were in Sydney for the film’s world premiere at the Mardi Gras Film Festival.

Writer Kyle Goldfinch (@KyleGoldfinch), who also executive-produces the multimedia pop culture magazine, spent some time with the pair, and wrote the article, “There’s Something Beautiful,” which appeared in the magazine’s fourth issue.

The audience was cheering and having a good time.

Goldfinch saw the movie at both its screenings in Australia.

He confessed on Twitter he’s watched the trailer more than 50 times, described the film as “incredibly fun and a great ride with the two actors playing off each other in this very cute story. … The film is seriously fun and literally brought me to tears.”

He said he was impressed by how the guys “are not just intellectually smart but also incredibly nice and genuine,” and by the musical performances in the movie.

“The music of the film filled my heart with emotion with the awesome renditions of songs from my teenage self,” Goldfinch wrote, pointing to the performance by Ajiona Alexus (13 Reasons Why) as Allison Cross:

“She is a beast at singing, who rocks out tunes like a young Jennifer Hudson.”

Read the article at Popcorn Magazine »