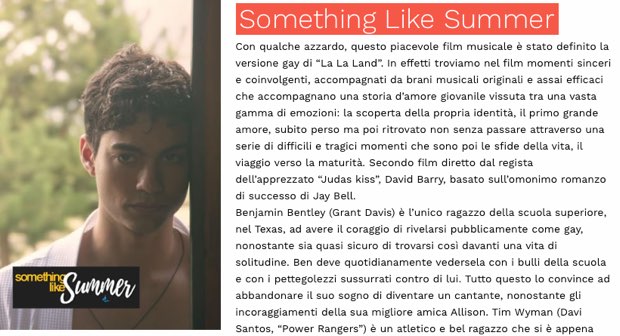 DEMONSTRATING continuing international interest in Something Like Summer, an Italian cinema website found some merit in calling it “the gay version of La La Land.”

“It’s a bit of a risk to call this pleasant movie musical the gay version of La La Land,” wrote the CinemaGay website.

Read the original review (in Italian) at cinemagay.it »

“But in fact, we found the film has sincere and engaging moments, accompanied by original and very effective musical pieces that accompany a youthful love story lived in a wide range of emotions,” the reviewer added.

The site noted the film was made by the creators of the “well-liked Judas Kiss.”

The first reference to Something Like Summer as “a gay La La Land” was in the festival promotional information for the film in its screening at the qFLIX Philadelphia Film Festival.