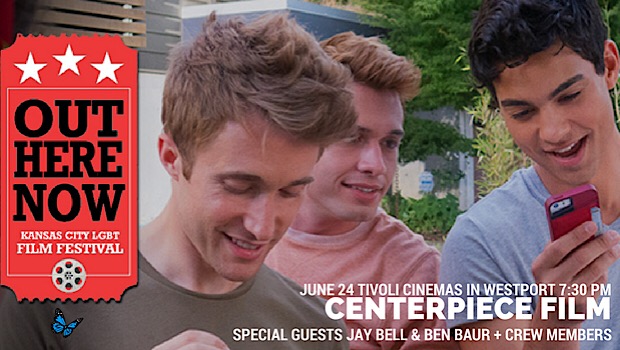 The Kansas City, Mo., LGBT film festival, Out Here Now, plans to host a “hometown premiere” June 24 for Kansas-born Jay Bell, author of the novel, “Something Like Summer,” on which the film is based.

IN ATTENDANCE Jay will be accompanied by:

The festival will be the film’s Midwest Premiere, and will culminate several days of appearances by Jay Bell at literary events.

HOMECOMING “We really wanted to screen Something Like Summer in America’s heartland, where so many LGBT youth face challenges at home and school,” said writer-producer Carlos Pedraza. “It just feels right that our Midwest Premiere is happening near where Jay Bell grew up.”

Jay returns to Kansas City for this premiere of the screen adaptation of his acclaimed novel. Originally from Olathe, Kan., Jay attended primary schools in Johnson County and received his undergraduate degree from the University of Kansas.

SCREENING DETAILS, including location and ticket information are available on our Screenings page.
AFTERPARTY Plus, join Jay Bell and Ben Baur after the film at Bistro 303!

STORYTELLERS’ SATURDAY Something Like Summer is the centerpiece feature film on the festival’s “Storytellers’ Saturday” on June 24, the third of eight themed days of Out Here Now.