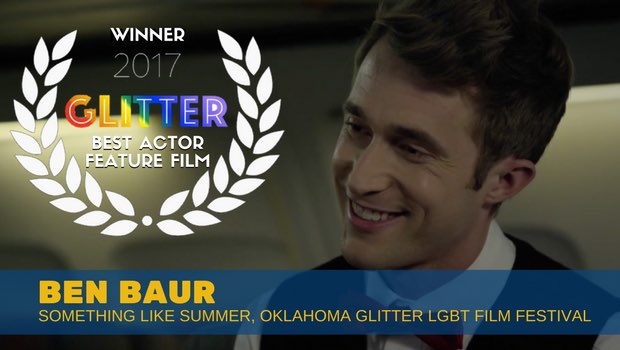 BEST ACTOR Oklahoma’s GLITTER LGBT Film Festival honored Ben Baur (Jace) as Best Actor in a Feature Film for Something Like Summer where the film screens as the closing feature July 29 in McAlester, Okla.

Ben Baur attended the screening, introducing the film and doing a Q&A.

“We’re excited to have the film screen at another festival in the heartland, where so many LGBT youth still confront bullying and homophobia,” said producer Carlos Pedraza. “And, of course, we’re glad to have Ben on hand to represent the film. He deserves the Best Actor award.”

The film was also a finalist for the Best Feature and Best Director awards.

The festival offered LGBT films to its community free of charge, “looking to provide a diverse outlet for art in Southeastern Oklahoma,” according to festival director Kelly White. “Our festival is mainly for diversity and education.”

NOMINEES The features nominated in Something Like Summer‘s award categories were:

GLITTER screens its films at Fat Mary’s Lounge & Cabaret with both indoor and outdoor screenings, as well as entertainment geared toward diversity, including performances by some of the state’s best female impersonators.

In addition to its film awards, the festival includes screenwriting and photography contests.

CHARITY A portion of the proceeds from the festival will be donated to a different charity each year that deals with social issues affecting the LGBT community, such as the Trevor Project and Human Rights Campaign.