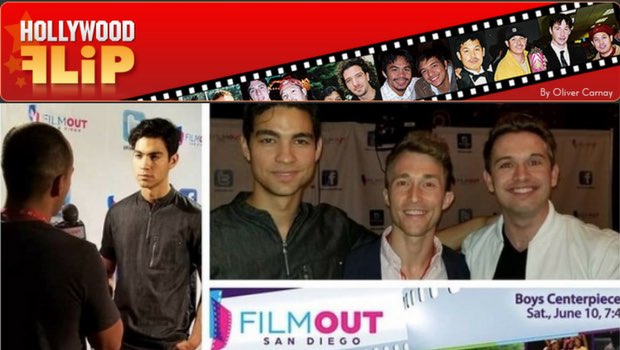 Davi Santos interviewed on the red carpet at FilmOut San Diego, and joined by co-stars Ben Baur and Grant Davis.

The Hollywood Flip website published an interview with Something Like Summer star Davi Santos, who plays Tim Wyman in the movie.

It was a fantastically organized shoot. The actors got along, the director gave us liberty, and we were each committed to the story.

Carnay asked Davi about how he was cast, the role he played in casting the role of Ben, and what life on the set was like while the movie was shot in Portland for a month.

HOLLYWOOD FLIP focuses on Philippine and Hollywood entertainment news, events, and performing artists in the fields of music, television, movies, stage, concerts and other form of entertainment.

Carnay is a Los Angeles-based columnist, publicist and photographer. He is a Hollywood-Filipino entrepreneur with more than 20 years of experience in entertainment writing and publishing, managing talent and concert producing,