Hypable: ‘The Film Blew Me Away’ 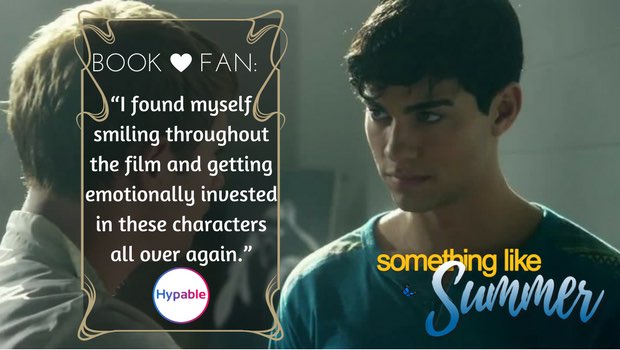 A FAN of the novel on which Something Like Summer is based reviewed the film for Hypable.com, calling it a faithful adaptation that “absolutely blew me away.”

The writer, Matthew Tadros, drove to the sold-out screening of the movie in San Diego, where it won awards for directing, acting and its musical soundtrack. Hypable is a news and entertainment website.

Tadros, who counted himself as a “very big fan of Jay Bell’s ‘Something Like’ series,” cited the film’s “visually pleasing” cinematography.

‘PHENOMENAL’ ACTING He also found the acting “phenomenal,” with Ben Baur a “perfect fit” for the character of Jace, and Davi Santos bringing “a lot of heart” to his role as Tim Wyman.

The movie is a beautiful expression of not just LGBT+ love, but love in general, and how love and art are connected.”

Tadros admitted to some trepidation about newcomer Grant Davis portraying the lead, Benjamin Bentley, upon whom so much of the story rests.

“I am happy to say that my concerns were completely unfounded,” Tadros said. “Davis brought the same strength and fearlessness that Benjamin has in the books.”

Something Like Summer is “a great way for Davis to start his career and he is definitely one to watch,” Tadros added.

‘MUSICAL RESPITES’ Tadros noted that where the novel easily shared Benjamin’s thoughts with readers, the film uses songs to open a window to his thoughts and feelings. ” Tadros said the movie’s “quasi-musical” aspect was another concern of his.

The songs “flowed seamlessly with the main story of the film. … I came to appreciate these brief musical respites and thought that it fully rounded out the film,” he wrote.

Tadros rated the film a success. “I found myself smiling throughout the film and getting emotionally invested in these characters all over again,” he wrote, “so much so that I found myself crying during the very final scene of the movie, despite the fact that I already knew how it would all end.”

Hypable previously covered Something Like Summer upon the release of its trailer, with writer Andrew Sims urging readers to “keep this gay romance adaptation on your radar.”