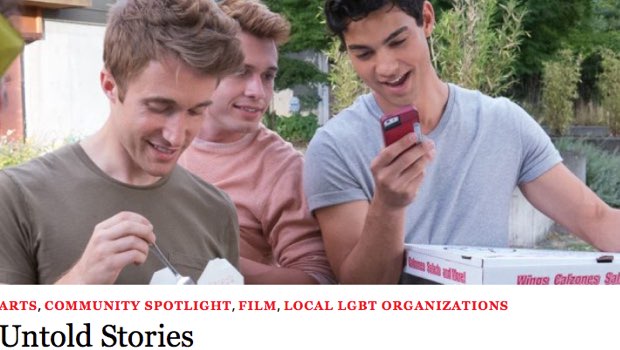 The feature photo for the Kansas City Star’s article comes from Something Like Summer. Photo/The Phoenix

AHEAD OF Something Like Summer‘s Midwest premiere, the Kansas City Star published an interview with the book’s author, Jay Bell, in its feature on Out Here Now, the Kansas City LGBT film festival screening the film on June 24.

The Star’s LGBT newsletter, The Phoenix, published the article, “Untold Stories: Kansas City’s LGBTQ Film Festival,” by Joel Barrett, focusing on the value and impact of storytelling in the community. Barrett interviewed Jay Bell and filmmakers whose work will also screen at the festival.

Read the full article at The Phoenix, the Kansas City Star’s LGBT newsletter »

“Something Like Summer is based in part on Bell’s own experiences and observations as a young gay man in Texas, Kansas and Kansas City,” Barrett wrote. “He reflects on exploring Kansas City and gay culture as a young man.”

Jay Bell plans to appear at what the festival is calling the film’s “Hometown Premiere,” along with star Ben Baur and several members of the crew that made the movie.

In the article, Jay Bell says: “I began reading gay stories and watching gay movies. They all felt like the stories either revolved around someone coming out, and then after they came out the credits roll, or they were more like Priscilla, Queen of the Desert which is very flamboyant and fun to watch, but perpetuates the myth that there is a gay lifestyle. When I sat down to write, I wrote stories about what I was used to and what I experienced in the hopes that there would be other people who read the stories who went through similar experiences.”

Jay Bell is originally from Olathe, Kansas, and earned his undergraduate degree from the University of Kansas.

A still from Something Like Summer headlines the article.