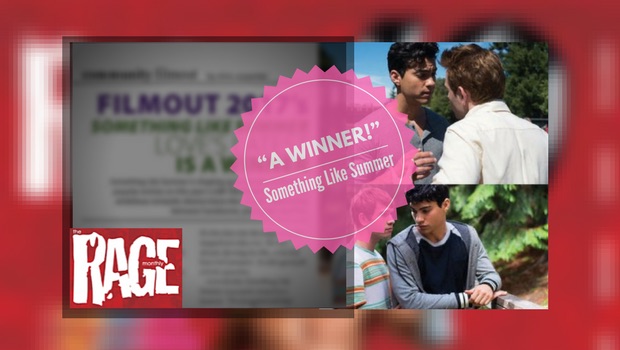 ‘AMBITIOUS ROMANCE’ With Something Like Summer‘s West Coast premiere just around the corner, Rage Monthly, a Southern California magazine proclaimed the film “a winner [that’s] shaping up to be one of the most popular entries on this year’s LGBT film festival circuit.”

In an interview with writer and producer Carlos Pedraza published in The Rage’s June issue, celebrating its 10th anniversary, writer Chris Carpenter described the film as “an ambitious romantic drama.”

The magazine featured Something Like Summer as part of its coverage of FilmOut San Diego‘s 19th year. Summer is the Centerpiece Film of the festival, screening on June 10.

‘Love’s Latest is a Winner’

PROPER MUSICAL? Carpenter also wondered “whether Something Like Summer is properly termed as a musical.” Pedraza confessed, “We struggled with that in preproduction. It has songs but not really full-blown production numbers. Ultimately, we embraced it.”

Rage Monthly is part of the EDGE Media Network, which bills itself as the world’s largest network of LGBT media. Rage publishes separate editions for San Diego, Orange County and Los Angeles.