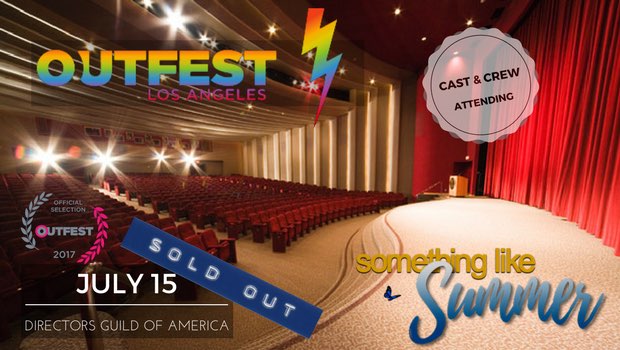 DELIGHTFUL! Outfest, the world’s premier LGBT film festival, chose our “delightfully musical tale” to screen at the Los Angeles fest on July 15. The showing had sold out by Friday, July 7.

Meanwhile, California-based cast and crew of Something Like Summer planned attend its screening.

The lineup of 194 feature and short films from 30 countries was released June 2 by the festival. Outfest Los Angeles is 11 days of world-class films July 6-16, also offering panels and parties to an audience of more than 40,000 people.

Something Like Summer is one of only 16 U.S. dramatic features selected to screen at the festival.

This delightfully musical tale takes off, encapsulating all of the delirious highs and painful lows of young love. This crowd-pleaser brings a beloved series of YA novels to life.

“This is an important festival for Something Like Summer,” said writer-producer Carlos Pedraza. “Given its location in the heart of the entertainment industry, more executives attend Outfest than any other LGBTQ film festival. The exposure bodes well for getting the word out about the film.”

ATTENDING The screening is scheduled at the Directors Guild of America Theater 1 on Saturday, July 15, on the festival’s final weekend. Many of the film’s Los Angeles-based cast and crew plan to attend, including:

MEDIA Screening in the world’s media capital, Something Like Summer will benefit from coverage of the festival from national outlets such as Vanity Fair, CNN, USA Today, E! Entertainment Television, Access Hollywood, Variety, Entertainment Tonight, US Weekly, The Advocate, OUT, MTV, Hollywood Reporter, Genre, Huffington Post, and the Independent Film Channel.