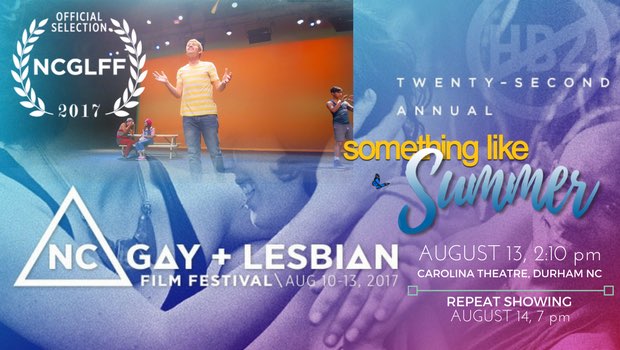 DURHAM, N.C. Something Like Summer is one of 22 feature films chosen to screen at the 22nd annual North Carolina Gay and Lesbian Film Festival, with two showings scheduled on August 13 and 14 at the historic Carolina Theatre in Durham, N.C.

NCGLFF is the second-largest LGBT film festival in the Southeast, attracting thousands of patrons each year since its founding in 1995. The first run of its selected films is August 10-13, with repeat showings August 14-17.

“We’re happy to be back at the Carolina Theatre,” writer and producer Carlos Pedraza said, “and to contribute to the diverse films they’re offering the community this year.” Blue Seraph Productions’ film, Judas Kiss, was featured at the festival in 2011.

The festival is offering 148 films this year — 126 shorts and 22 features, according to festival director Jim Carl.

The Durham Convention and Visitors Bureau named the NCGLFF a Signature Event for the city, the highest honor bestowed on a cultural event or attraction by the organization.