Join Us at Post-Screening Reception in Hollywood 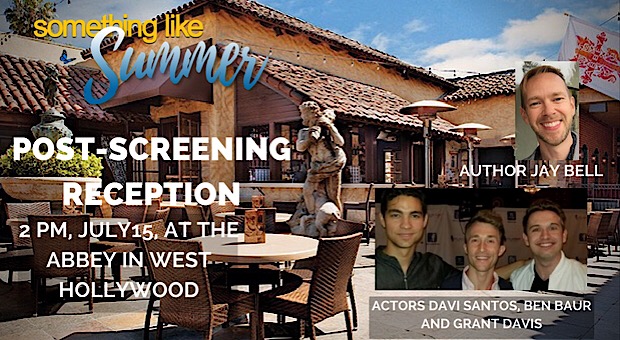 CAST AND CREW from Something Like Summer planned to meet fans at a reception following the film’s sold-out screening Saturday, July 15. The event will be at The Abbey, a bar-restaurant in West Hollywood.

The reception is scheduled to begin at 2 p.m., following the 11 a.m. Outfest screening at the Director’s Guild of America and a Question & Answer session after the film.

“We’re all looking forward to spending a little more time with people who enjoyed the book and film,” said screenwriter and producer Carlos Pedraza.

IN ATTENDANCE The film’s three lead actors planned to be at The Abbey — Grant Davis (Ben), Davi Santos (Tim) and Ben Baur (Jace).

The author of the book, Jay Bell, was to have flown in from Chicago for the screening and planned to attend the reception. He held a similar event following Summer‘s screening in June at Kansas City.

A number of supporting cast members will be there, too, along with other producers, Indiegogo contributors and production crew who brought the story to life.