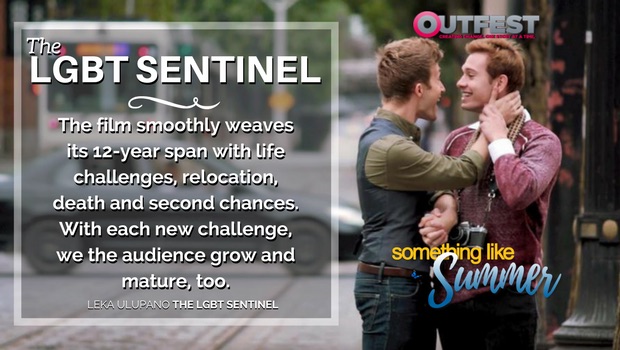 Reviewer Leka Ulupano reviewed the movie’s Hollywood premiere at Outfest, saying it “offers a unique twist to the popular gay adult novel. … Although not quite considered a musical, this adaption incorporates songs that feed into [main character] Ben’s emotional journey.”

DREAM TEAM Ulupano said the combination of talent from screenwriter Carlos Pedraza, director David Berry and the source novel’s author, Jay Bell, made for a “dream team [that] captures and beautifully depicts the journey of young gay men trying to find themselves in the world. … Something Like Summer establishes the understanding, love, and courage it takes to truly live happily.”

The actors truly bring to life any character from script to screen, and this cast’s execution was well on point.

Read the full review at the LGBT Sentinel »

MUSICAL TRANSITIONS The Sentinel credited Pedraza’s use of music “as a form of transition … creating a smooth easy-to-follow storyline.” Combined with Berry’s experience with musicals, the pair “were a match made in heaven. The timing, cinematography, and song choice made an impact on the movie’s overall message.”

The screenplay “smoothly weaves the [film’s] 12-year span with reasonable life challenges,” Ulupano wrote, letting “the audience grow and mature, too, alongside Ben.”

CAST While duly crediting the screenwriter and director, the review noted it was the “cast that truly brings light and life to the film.”

That was most evident in the movie’s portrayal of the lead characters’ family life.

“Including the dichotomy of family and friendships made this even more realistic,” Ulupano wrote. “Not only do these leading men have to fight for love, family dynamics and support from friends add to the complexity of their journey. Screenwriter Pedraza and Director Berry perfectly weave in glimpses of family acceptance and rejection with the portrayal of Ben and Tim’s family.”

Cast members exhibited a “genuine relationship” that contributed to their successful portrayals, the review observed. “This cast matched and performed beyond what was written in the screenplay bringing in their own personality and attitude to these characters,” Ulupano added.

The LGBT Sentinel was also an official sponsor of Outfest, where Something Like Summer screened July 15.