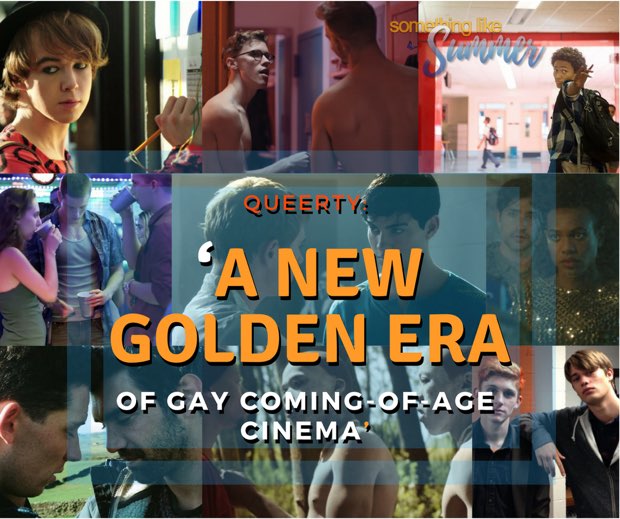 Films that Queerty says represent the new golden age of LGBT stories include (from top by row, left to right) Freak Show, Prom King 2010, Saturday Church, Beach Rats, Something Like Summer, Alaska is a Drag, God’s Own Country, The Wound and Handsome Devil.

GOLDEN AGE Queer news and culture blog Queerty named Something Like Summer as part of the new “golden age of queer coming-of-age film,” noting it “may prove one of this year’s sleeper hits.”

In his July 7 article, wrapping up San Francisco’s recent Frameline film festival and looking ahead to Los Angeles’ Outfest, where Summer screens July 15, writer David Reddish named the film as one of nearly a dozen recent films marking a new trend: a new and “glorious diversity” in coming-of-age tales.

These stories deal with long-trod subjects like coming out, fighting for equality and finding love, but with a new twist—coming out now feels more like part of growing up rather than an earth-shattering revelation.

These new stories continue to mine the difficulties faced by LGBT youth, Reddish wrote, featuring no “lack of drama.”

Read the full article at Queerty »

Reddish compares this new crop of films to gay cinema’s heyday in the 1990s, “a period [that] produced some incredible work,” though “it took a while for queer films to evolve beyond an obsessive focus on gay men dying or coming out.”

As the LGBT community has progressed since then, and “evolved as an essential aspect of American culture, so do our stories,” Reddish concluded.

Reddish points to 10 films, including Something Like Summer, that make the case for this new “golden age.” Summer ranks No. 5 on the list, which includes: