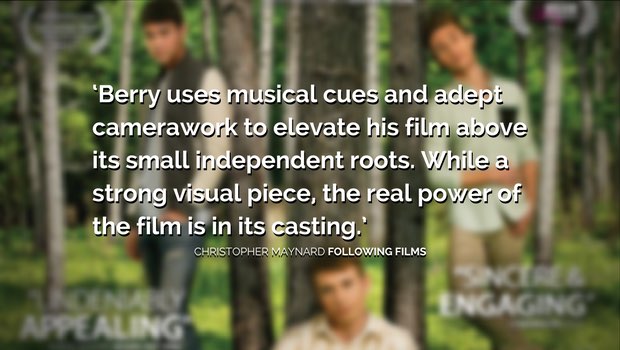 The movie review website Following Films found a lot to love in Something Like Summer, praising its cast and director David Berry for combining to “elevate his film above its small independent roots.”

Written by Christopher Maynard, the review pointed to Berry’s talented use of “musical cues and adept camerawork” to tell a story that “shows how we change and grow apart.”

The camera moves in ways we rarely see in independent features. It shows a sense of confidence and skill level most seasoned directors don’t show.

POWERFUL CASTING Apart from its strong visuals, Maynard highlighted the casting as “the real power of the film.”

He wrote, “All of the leads give layered and nuanced performances that grow throughout the film. They all make subtle changes in the way they deliver dialogue and process emotion as their characters change” over the course of the dozen years depicted in the movie.

STRONG VISUALS “Talented director” Berry also served as Something Like Summer‘s cinematographer, uniting the two roles to create “a strong visual style that supports and defines his storytelling … using everything from 1940s-style lighting to heighten a scene that takes place in a jazz club in Paris to making a Rollerblading accident look truly painful.”

GAY ‘LA LA LAND’? Maynard observed that while some critics have called Summer “a gay La La Land, I’m not sure it’s the best comparison,” he wrote. “One of the strongest things about SLS is how it tracks a relationship over a long period of time.”