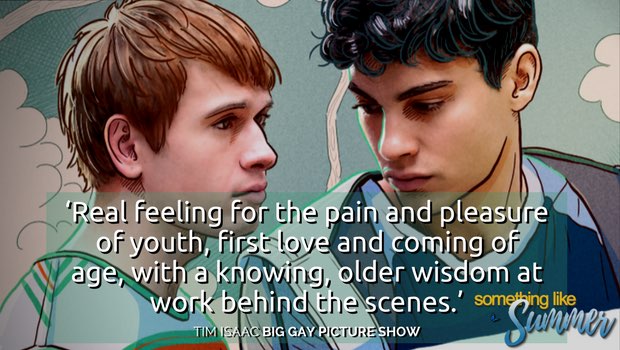 ‘NOT A TYPICAL MUSICAL’ The entertainment website, Big Gay Picture Show, says Something Like Summer instead, “takes place in a hyper-real world [where] it tells a story of love and loss that occasionally jumps from the real world to a stage, where the main character breaks into song.”

While unusual at first, the songs “add real charm to the movie,” writes reviewer Tim Isaac. “The musical numbers add something we don’t often see,” and while the pursuit by protagonist Ben (portrayed by newcomer Grant Davis) of athletic Tim (Davi Santos) recalls other coming-of-age stories, “it becomes more interesting as Ben grows both into his sexuality and his life beyond his school days.”

Grant Davis [Ben] has the musical chops to pull off the songs, which help take us into the thoughts and emotions of the characters. The whole thing is done with a sincerity that is difficult not to find appealing.

‘REAL FEELING’ The review credits the movie’s portrayal of Ben as a relatable character, exhibiting “a real feeling for the pain and pleasure of youth, first love, coming of age and realising what’s really important in life, told in a way that suggests there’s a knowing, older wisdom at work behind-the-scenes.”