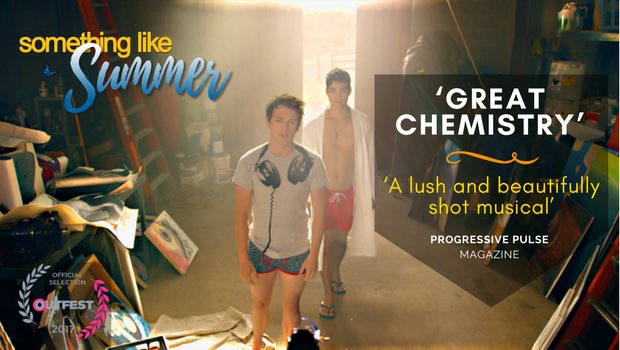 LOS ANGELES – In its overview of the upcoming offerings at Outfest, lifestyle magazine Progressive Pulse called out the performances of the stars of Something Like Summer, as well as the film’s innovative use of music.

Writer Kevin M. Thomas noted musicals were well represented at this year’s 10-day Outfest film festival, seemingly inspired by the success of last year’s La La Land, “but obviously these movies were well underway before that movie came out.”

‘Something Like Summer’ is an excellent example of the progressive use of musical interludes.

THE CAST He found star Grant Davis’ debut performance as Ben Bentley presented a compelling mix of his character’s awkward geekiness and pride. Some of Summer‘s songs effectively “break away from the plot, letting us in on Davis’ innermost thoughts,” Thomas said.

“Davis… blends these attributes well as his lust for Davi Santos’ [character] Tim grows. The two have a great chemistry.” He continued, “Throw in the ever-appealing Ben Baur (as Jace Holden) and a triangle is born.”

The article described the movie as “lush and beautifully shot” as it covers the story’s 12-year time span with a “clever use of movie subtitles” and transitions.

MORE MUSICALS Thomas also shone a spotlight on other musical films featured at Outfest, including: