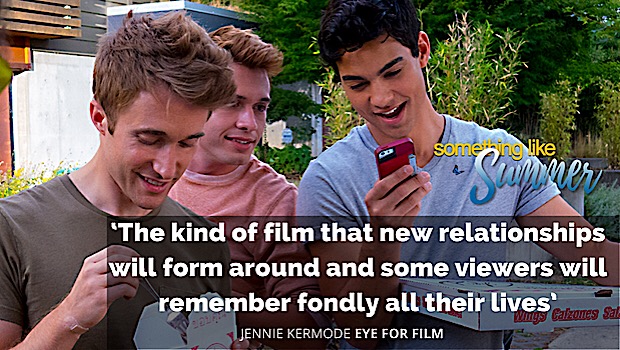 FOND MEMORIES The British film review site, Eye for Film, found a lot in Something Like Summer to appeal to younger viewers who, the reviewer observed, will likely remember the movie fondly throughout their lives.

While the film raises several distressing issues, reviewer Jennie Kermode noted that it offered a “light-hearted, optimistic and romantic” antidote.

“There’s a shortage of films like this for young gay men, so perhaps it’s no surprise that Something Like Summer has won a cluster of awards,” Kermode wrote. “It’s attractively shot with an appealing young cast.”

It’s the kind of film that new relationships will form around and that some viewers will remember fondly all their lives.

Read the full review at Eye for Film »

The review observes Something Like Summer is “not a musical in the strictest sense [but] contains several musical performances built around the fact [Ben, played by Grant Davis] is a talented singer” — a performance Kermode noted “perfectly complements the mood” of the film, “alongside Cian McCarthy’s sentimental score.”

HEARTBREAK The review noted the otherwise appealing notion that Ben is fought over by people “ordinarily expected to be out of [his] league,” creating what Kermode called a “meant-to-be ethos [that what] might seem wonderful to young viewers looks to older ones like a highway to heartbreak. … Ben’s terrible decisions are too often glossed over as romantic.”

Even so, “at a technical level, the film is flawless to the point of feeling a little over-produced,” Kermode concluded. “Overall, Something Like Summer is very good at what it does.”

Two men who secretly fell in love at high school struggle to balance their friendship as adults with their lingering romantic feelings.