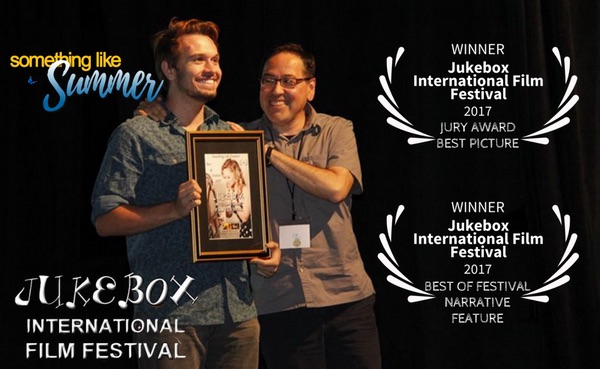 CARSON CITY, Nev. — Something Like Summer won the Best of Festival award for Narrative Feature at the Jukebox International Film Festival and its jury award for Best Picture at an award ceremony August 16.

The film’s star, Grant Davis, and writer-producer Carlos Pedraza accepted the awards. Grant was born and raised in Carson City, Nevada’s capital, so the festival was something of a homecoming for him, with the Nevada Appeal newspaper putting him on the front page on August 15.

The film screened on that day. The Jukebox festival selected films that celebrate music in a significant way — music videos. short narratives, short documentaries, and feature-length narrative and documentary films.

THE BEST of Festival award was decided by the festival staff, while a group of filmmakers, musicians, audio engineers, writers, documentarians, publicists and editors from across the western United States chose the festival’s jury awards in each of the film categories.

“We’re deeply honored by these two awards from a festival that celebrates the important role music plays in storytelling and how it enriches people’s lives,” Pedraza said. “And it’s so special to see Grant share his first feature film with so many of the people who helped him become the outstanding performer he is today.”