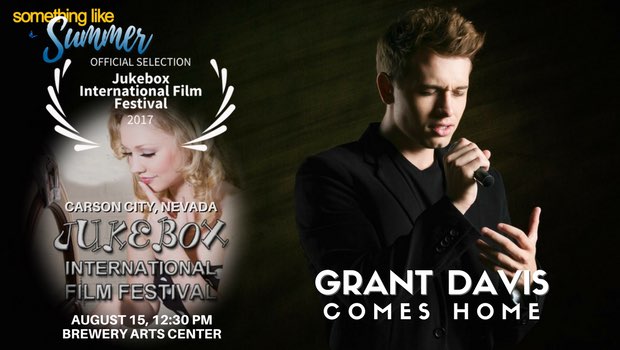 The two-day JIFF is presented in conjunction with Jazz and Beyond: Carson City Music Festival, a month-long, multi-venue concert series. According to festival coordinator Scott Young, “JIFF is designed to complement the music festival by presenting films that celebrate music and musicians.”

Coming home to share my work with the community and the people whom I love is by far the most exciting and worthwhile adventure.

Grant is a native of Carson City, and still has family there. He said he was thrilled to present his first starring role in his home town.

“I went to Australia for the film’s world premiere, and I can’t lie, I was excited for that trip,” Grant said. “But coming home to share my work with the community and the people whom I love is by far the most exciting and worthwhile adventure I have taken so far.”

CELEBRATE MUSIC According to organizers, narrative films screening at the festival must incorporate musical themes, such as storylines that focus on musicians or performers or songwriters, music-oriented settings or locations, or other celebrations of music.

“We’re proud that Something Like Summer appeals to people on a lot of levels,” writer and producer Carlos Pedraza said. “Its use of music opens a window to see our characters in ways you don’t often see in modern coming-of-age stories.”

APPEARANCES Grant and Carlos plan to attend the festival, with several additional events and media interviews planned, including a Q&A session, a live musical performance by Grant and a post-screening reception. The two will also participate on a filmmaking panel, along with other guests attending the festival.