Jay Bell Releases ‘School Edition’ of Something Like Summer Book 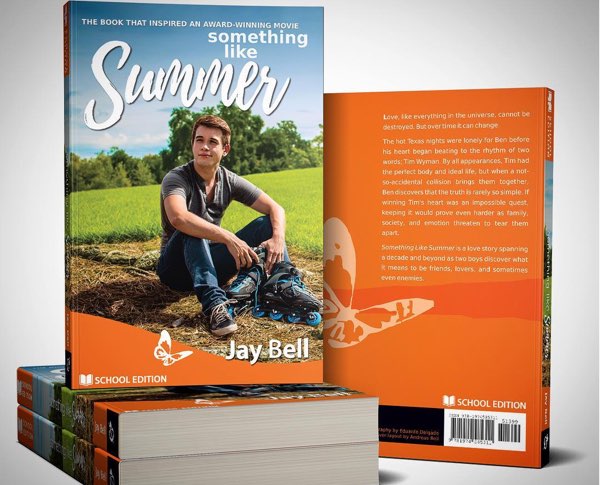 AUTHOR JAY BELL is releasing new editions of his novel, “Something Like Summer,” on which the film is based, hoping to extend the story’s reach to students, and to improve the first edition.

“I really want to get ‘Something Like Summer’ into schools and into the hands of young people, but the explicit content has always made that difficult,” Bell said. “That’s why I’ve created a new edition with ‘fade to black’ sex scenes.”

Libraries are a big market segment for many book sales, so a less explicit version of the novel would gain it entry to many schools that had been otherwise eager to include the book in their collections.

“If you are a school, library, outreach shelter, gay-straight alliance, or anything else that supports young queer people, then I would happy to work with you on getting the School Edition of ‘Summer’ to where it needs to be,” Jay added.

In a nod to the film adaptation, the cover of Jay’s School Edition features a photograph of actor Grant Davis, who plays the main character Benjamin Bentley. The image was a promotional photo for the movie shot by its videographer and trailer editor, Eduardo Delgado; it is featured in the background of the website’s homepage.

‘Nearly every single paragraph has been changed in some way.’

SECOND EDITION While editing the original for his School Edition, Jay took advantage of the opportunity to address some flaws in the book, and the changes while mostly minor, turned out to be extensive.

“I decided to update the standard version as well. Nearly every single paragraph has been changed in some way,” Jay said. “Ideally, you won’t even notice the difference. It’ll just be a smoother read.”

CHANGES The biggest change in the second edition is the pacing near the ending. “Did you ever feel like the end of ‘Summer’ goes by too fast?” Jay said. “Yeah, me too.”

He wanted to address a “vital aspect missing in Part Three of the book, so I wrote some new scenes for Chapter 27.” Jay talks more about what the additional scenes entail (warning: spoilers), and why he made the changes, in a blog post on his website.

Among other changes in the second edition:

AVAILABLE The School Edition and second edition of “Something Like Summer” are available on Amazon, iTunes, Google Play and Smashwords, Jay said. Meanwhile, the next installment in the ‘Something Like…” series is “Something Like Hail,” due out September 6.

Early purchasers of the First Edition ebook can easily download the update via Amazon and Apple’s iBooks. According to Jay, here’s how.