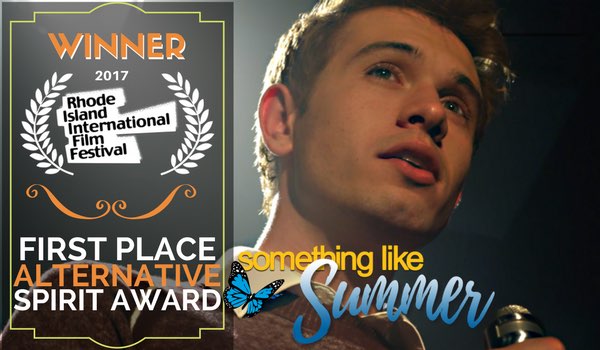 PROVIDENCE, R.I. — Despite a technical glitch that forced the cancellation of Something Like Summer‘s August 13 screening, the film still earned First Prize in the competition for the Rhode Island International Film Festival’s Alternative Spirit Award.

“We feel awful so many people had come to see the movie and went home disappointed,” producer Carlos Pedraza said. He planned to contact the festival staff to see what might be done. The festival concluded on August 13.

Jurors in the festival’s competition, however, had already seen the film and voted to grant it First Place in the award category honoring LGBTQ feature films. Summer tied for First Place with High Low Forty, directed by Paddy Quinn. Prom King, 2010, directed by Christopher Schaap, won the Grand Prize.

“It’s odd to win an award at a film festival at which we never technically screened, but we’re grateful.”

“This mainstream festival, one of the top 10 in the country, has established itself as a real supporter of LGBT filmmakers,” Pedraza said, “and we’re thrilled to have another of our movies honored by them.”

RIIFF WAS to have been Summer‘s New England premiere, with attendees from throughout Southern New England, including Connecticut, Massachusetts and Rhode Island.

Produced by the 35-year-old Rhode Island arts organization Flickers, the festival, in its 21st year, “celebrates the independent filmmaking spirit,” providing a showcase for 200 international features, documentaries, and shorts.