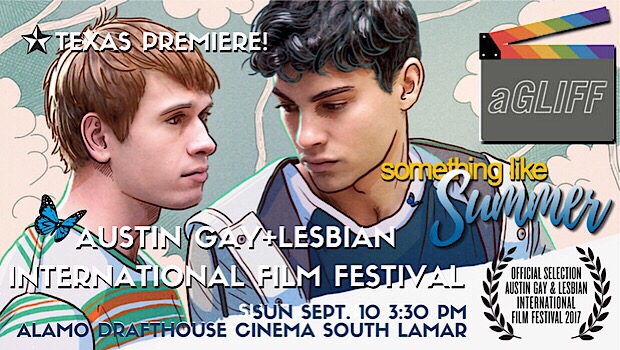 ‘HOMECOMING’ — Something Like Summer is largely set in Texas, particularly where the characters attend college in Austin, so it’s fitting that the film’s Texas and Southwest premiere will be at the Austin Gay + Lesbian International Film Festival on September 10.

Something Like Summer is one of 39 narrative and documentary feature-length films in the lineup for the festival’s 30th year.

“It’s wonderful that a film in which Austin plays such a big part gets to screen at the city’s film festival,” Berry said.

This year marks the Austin festival’s 30th anniversary, which is also offering 54 short films depicting “a myriad of issues across cultures, race, immigration status, class, gender identity and expression, age, and religion,” according to organizers.

Much of ‘Something Like Summer’ is set in Austin because I wanted a safe haven for my characters in an otherwise conservative state.

The trip to the Austin festival will actually be author Jay Bell’s first time in the city where so much of his books are set.

“Much of Something Like Summer’s plot is set in Austin because I wanted a safe haven for my characters in an otherwise conservative state,” Bell said. “It feels right then that Ben and Tim are returning home to such a fantastic city to be part of aGLIFF. I look forward to joining them there.”

Bell’s attendance at aGLIFF will be his first actual visit to Austin.

SHOT IN TEXAS? Something Like Summer was not shot in Texas, according to producer Pedraza, because the state of Oregon offered substantial financial incentives to make the film there. However, he worked to find Portland-area locations that resembled their Texas counterparts.

“I spent a week in Texas scouting locations before we decided to shoot in Portland,” Pedraza said, “so I knew what I had to look for in Oregon. [Director] Dave Berry is from Austin, so I wanted him to be satisfied with the ‘look and feel’ of our locations. That took many weeks of location scouting.”