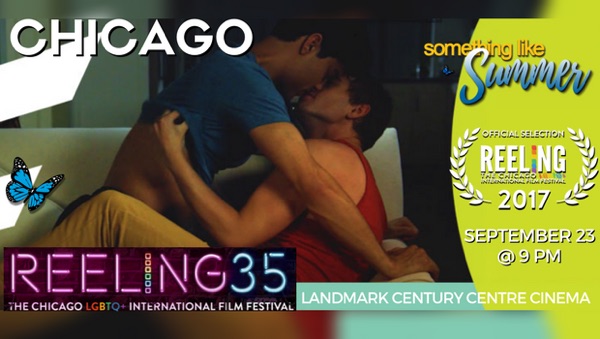 CHICAGO’S REELING International Film Festival is the world’s second-oldest LGBT festival, celebrating its 35th anniversary this year, screening Something Like Summer on Saturday, September 23 at 9 p.m.

“It’s wonderful to return to Chicago with another of our films,” writer-producer Carlos Pedraza said. Blue Seraph Productions’ Judas Kiss screened at Reeling in 2011.

Brenda Webb, festival founder and executive director of Chicago Filmmakers, the nonprofit media arts organization that produces Reeling, commented on the lineup: “It is gratifying to know that, after more than 35 years since Reeling started in 1981, LGBTQ cinema is more vibrant than ever before. Each year, there are new stories that emerge as well as familiar stories told in fresh and exciting ways.”

MUSICALS’ YEAR Besides Something Like Summer, one of the festival’s highlighted films, two other musicals are opening and closing Reeling35 — Hello Again on September 21 and Saturday Church on September 28.

Co-star Ben Baur’s short film, Something New, is also scheduled to screen on September 23 at 2:30 p.m.

This crowd pleasing romantic drama brings a beloved series of novels to life as the two lead characters explore the complex lines between friends, lovers and strangers, enduring love and heartbreak along the way.

Reeling35 is presented by Showtime Networks, and is a program of Chicago Filmmakers, a non-profit media arts organization that has been serving Chicago’s independent film community for more than 40 years.