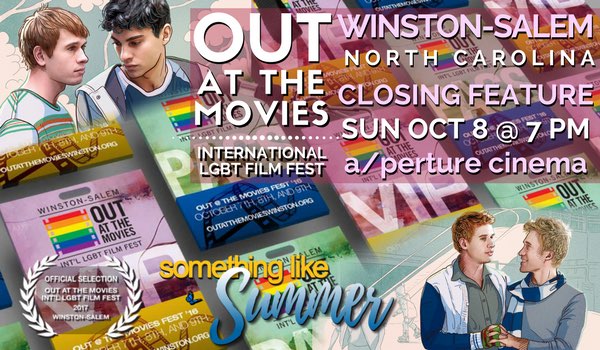 CLOSING FEATURE Something Like Summer closes out Winston-Salem, N.C.’s 13th annual Out at the Movies International LGBT Film Festival on Sunday, October 8 at 7 p.m. at the a/perture cinema.

“We love that North Carolina loves our film,” writer-producer Carlos Pedraza said. The movie has screened at festivals in Charlotte and Durham.

The festival runs from October 5-8, presenting 14 features and a shorts program.

Grant, Davi and Carlos are scheduled to participate in a Q&A following the film, then proceeding to a filmmaker reception and awards party.

The a/perture cinema is an arthouse theater operated by the Downtown Winston-Salem Community Cinema to further the theater’s mission of “engaging and entertaining the community through the art of film by showcasing informative, educational, thought-provoking and inspiring films.”

Winston-Salem is also the home of the University of North Carolina School of the Arts, often a partner organization with Out at the Movies.