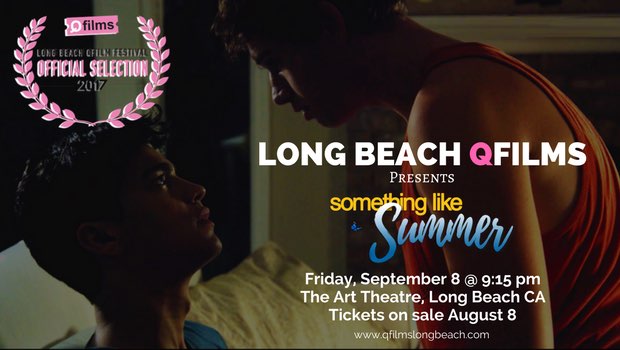 BACK TO CALIFORNIA — Summer Like Summer returns to Southern California as the Friday night feature at the Long Beach QFilm Festival on September 8. The film will screen at 9:15 that night.

Following sold-out showings at San Diego in June, where the film won three awards, and Outfest in Los Angeles in July, Summer comes to Long Beach’s longest-running film festival, which launched in 1993.

Many of the movie’s cast and crew live and work in the Los Angeles area and plan to attend the screening, Pedraza added.

According to festival organizers, Something Like Summer joins “some of the most acclaimed features on the film festival circuit [with] numerous filmmakers and cast members … present for audience discussions after each screening.”

Summer will join about a dozen other feature films and three short film programs for the four-day QFilm Festival.

Its events include numerous parties and opportunities for attendees to mingle with filmmakers, actors, critics and other industry professionals.

Early September is proving popular at festivals for Something Like Summer; the movie was also scheduled to screen at Outflix in Memphis, Tenn., that week, and at the Austin Gay & Lesbian International Film Festival.