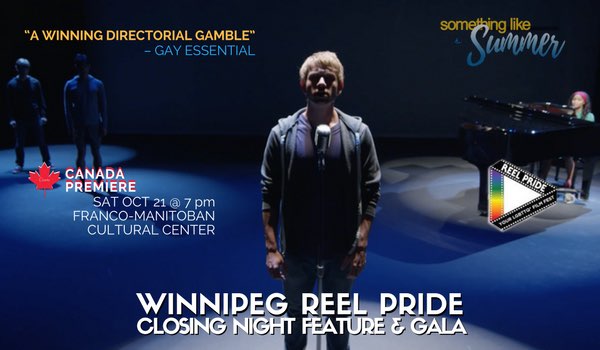 CANADA PREMIERE Something Like Summer‘s Canadian premiere comes to Winnipeg’s Reel Pride Film Festival on October 21 at 7 p.m. as the festival’s closing feature and gala event.

This marks the 35th year of the festival in the Canadian province of Manitoba. It runs from October 16-21, with a special pre-festival presentation of the ballet documentary Rebels On Pointe on October 10.

“We have been looking forward all year to our Canadian premiere, and Reel Pride has long been a supporter of our previous films,” said Summer screenwriter and producer Carlos Pedraza.

While most of the festival will screen at Winnipeg’s Park Theatre, Summer is scheduled to be shown at a special venue, the Franco-Manitoban Cultural Centre.

The movie is part of a lineup of 13 narrative and documentary features, plus a collection of movies in the Canadian LGBTTQ Short Film Competition.

The Canadian premiere of Something Like Summer is sponsored by the Royal Bank of Canada, which will host the festival’s closing night gala following the screening.