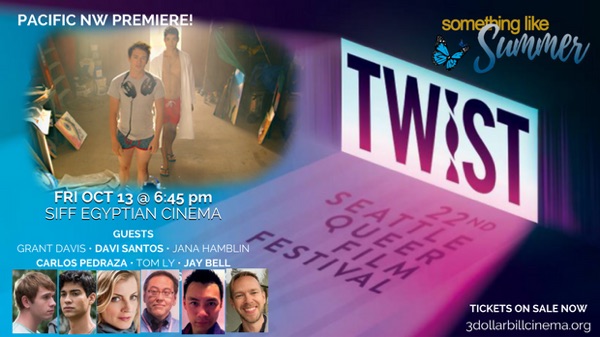 LUCKY DAY Friday, October 13, will be a lucky day — the Pacific Northwest premiere of Something Like Summer, the day it screens at TWIST, Seattle’s Queer Film Festival, and the hometown of screenwriter-producer Carlos Pedraza and executive producer Tom Ly.

“It’s a privilege to bring this film home to Seattle, along with cast and crew who hail from Washington and Oregon,” Carlos said. The film was shot in Portland, Ore., in 2015.

This beautifully shot film elegantly weaves Ben’s intimate musical revelations into the narrative,  as he is confronted by the cross-currents of life,  experiences the complexities of true love, and ultimately embraces enduring friendship.

EXCITING ENSEMBLE In its Highlights section, TWIST’s film guide lists Something Like Summer under the Local Produce (two of its producers live in Seattle) and Exciting Ensembles themes.

A richly textured story about the thrill, awkwardness and obsessive nature of adolescent love, which grows over 12 years into one colored by conflict, loss, and rediscovery.

The short films produced by students in the most recent program are also featured in TWIST’s Local Produce theme. Those films screen on October 22 as part of the festival’s Three Dollar Bill Cinema Showcase.